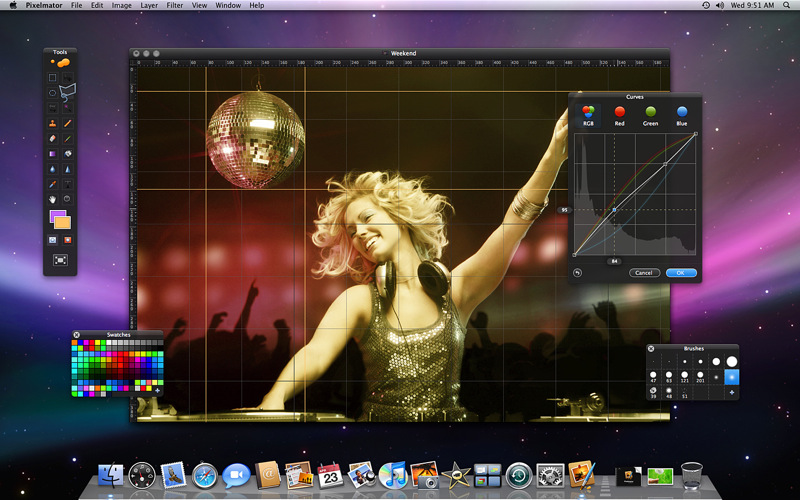 Any image editor has to endure comparison with Photoshop - it is par for the course. Few live up to expectation, and to some extent it is unfair comparison to make. That said, Pixelmator can be thought of as Photoshop for the masses. This is not as powerful or as feature packed as Adobe's landmark app, but it is available at a fraction of the costs and includes more well designed features than most people will have need for.

The app comes at a bargain basement price, but this does not mean that it is bargain basement software. There are more than 130 special filters to choose from, and if this isn't enough the plugin support means that Quartz Composer compositions can also be used.

App such as Pixelmator are most commonly used for editing digital photographs, and to this end the software includes options such as a range of selection tools, blending modes, gradient fills, Aperture support, a wide range of transformation tools, layer grouping and much, much more.

If you are working on a batch of images that all need much the same processes applied to them, Pixelmator can be used in conjunction with Automator to avoid repetitive work. Pixelmator can also be used to create images from scratch thanks to the inclusion of a wide selection of drawing tools - these are particularly useful if you are working with a graphics tablet. And if you find that you are sharing work with Photoshop users, Pixelmator is capable of opening and saving the Photoshop format complete with layers.

Pixelmator is a triumph of an app that is a pleasure to work with - both in terms of intuitive ease of use and a wonderful selection of powerful image editing tools.

- WebP images would not be opened on macOS 11. Fixed.
- When opening new images, the size of the document window would be slightly smaller than it should. Fixed.
- Pasting a selection that has been moved would result in it appearing in the top left corner. Fixed.
- After dragging a guide to remove it, it would appear to be present until zooming the image or editing it in some way. Fixed.
- The More Info tab in the File Info dialog would not display the information that it should. Fixed.