Optimise your PC for the best gaming performance. Maybe. 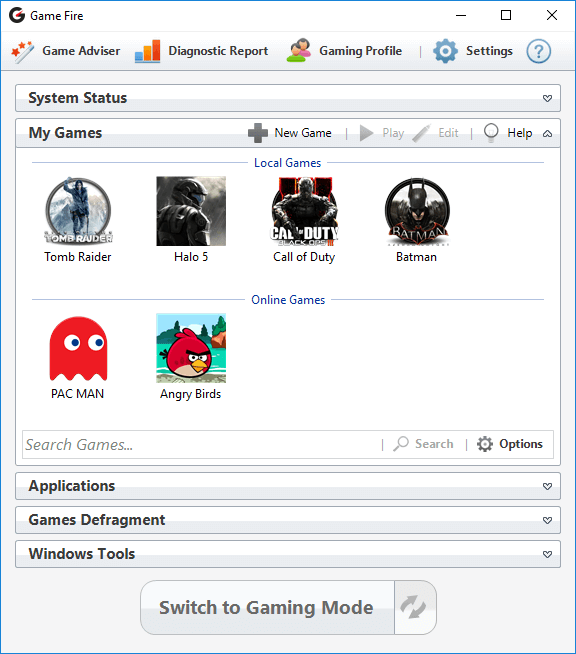 Game Fire is a suite of tools tool that aims to optimise your PC for performance.

A Games Defragment tool may also help by defragging the files and folders in your game folder (other files are left untouched, so it's much faster than a regular defrag).

While this sounds like it might be complicated, it really isn't. Essentially you just need to set up a "gaming profile", which tells Game Fire exactly which of these options you'd like to employ, and then it's able to apply all your chosen settings at a click.

Please note, the free build contains many settings and tools which are only available in the $24.95 version. This includes real-time performance optimisations, a host of tweaks in the Game "Adviser", internet and network tuneup, automatic services and third-party optimisations, and more.

2. The new release of Game Fire introduces a new optimization engine, which is fast, reliable and customizable.

3. My Games feature received several improvements like the ability to edit games information, the customization of game thumbnail, the ability to import default games shipped with Microsoft Windows and improved games search and sorting.

4. Improved the listing of running processes in Applications section with new tools to facilitate their management.

6. New system tweaks were added to Game Adviser in order to help you squeeze extra performance from your system.

7. Live Gaming Mode feature was replaced with Live Optimization which can efficiently boost system and apps performance in real-time by automatically focusing computer resources on applications you working with or games you are playing.

8. Diagnostic Report is a new feature introduced for experienced users who which to get detailed information about computer hardware and system configuration. This information can help diagnose and fix performance and reliability problems.

Game Fire offers plenty of optimisation features. We're not sure how useful some of them will be, but if you're desperate to squeeze more performance out of your PC then it might be worth a try.

Temporarily shut down unnecessary programs to free up system resources

Secure, repair and optimise your computer with this all-in-one PC toolkit

Use this disk defragmentation tool to keep your system optimised