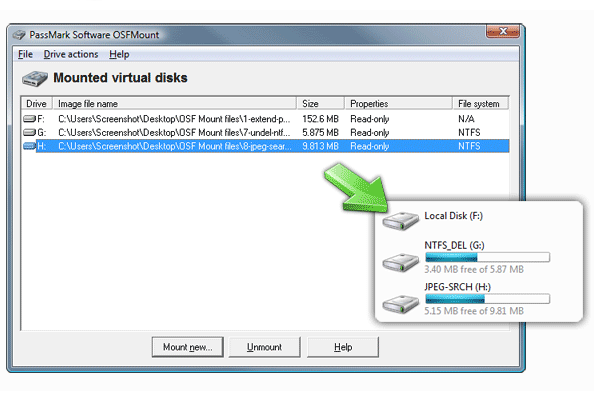 OSFMount is a unusually powerful tool for mounting disk images in Windows with a drive letter.

If you've downloaded an ISO file, for instance, this means you don't have to burn it to a blank disc to browse its contents. Just use OSFMount and it'll appear in Windows as a new drive, so you can view the image in Explorer and extract whatever files you might need.

And that's not all. The program can also create a RAM disk, so for instance you could allocate 1GB to a new virtual drive V:. This may help with performance of some programs, as RAM disks are extremely fast. It also has privacy advantages (tell a browser to store its internet history there and it'll disappear when you reboot). And you can even use OSFMount to save the contents of your disk in a variety of image formats, including ISO, BIN, IMG and DD.

Note that OSFMount is now 64-bit only.

Mount and browse a host of disc and drive image formats

Mount and browse a host of disc and drive image formats

Create and edit ISO, VHD, VMDK and other image formats

Create and edit ISO, VHD, VMDK and other image formats