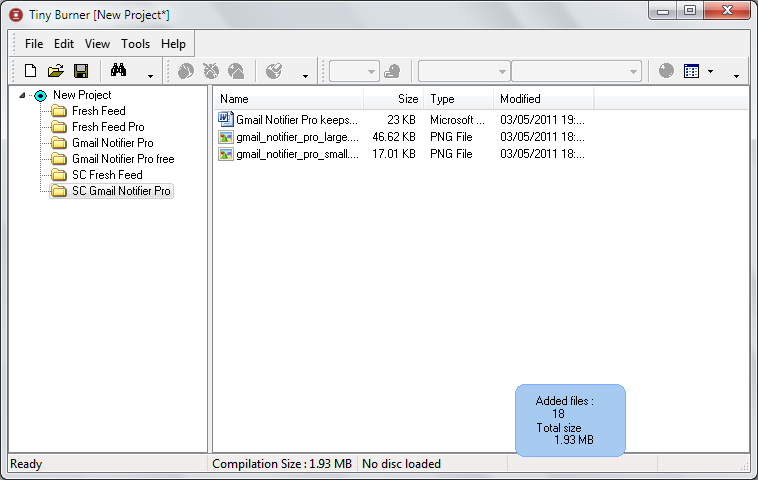 CD and DVD burners are now standard features of almost all computers and laptops and it is likely that you already have disc burning software installed - and even if you don't, Windows features native support for disc burning. As such you may well be wondering why you would need another disc burning tool such as Tiny Burner. One reason you may well be tempted into trying out the program is the fact that it is free of charge.

Despite being free, Tiny Burner includes many of the features you would expect to find in commercial disc burning tools, and benefits from being light on resources and its incredibly ease of use. The application can be used to burn files to CD, DVD and Blu-ray, and starting a new burning projects is a simple matter of dragging files and folders onto the program interface.

Tiny Burner also features a 'drop zone' floating window. This little panel always appears on top of any other programs or windows you have open, so it is always accessible for you to drop files onto. And that’s really all there is to the program; Tiny Burner has been designed to help keep the disc burning process as simple as possible.

An added feature of the app means that it is also portable. If you like the program and would like to be able to use it wherever you are using a computer, it can be installed to a USB drive so you can take it with you wherever you go.

Tiny Burner is not as fully featured as some disc burning tools, but it covers all the basics and operates quickly and effortlessly.