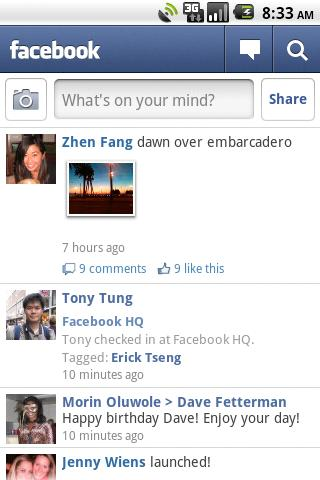 One of the most common uses for smartphones – besides making phone calls – is to access the internet, and social networks in particular. By far the most popular social network is Facebook, and the official Android app makes it even easier to access and interact with the services than the mobile version of the web site.

As you would expect, the app makes it possible to post status updates and messages as well as conducting chats with your friends. The current version of the app is a much sleaker affair than in the past, and it’s easier than ever to watch video, read messages and interact with others.

The very latest version of the app includes support for a swipe-to-update gesture which makes it faster than ever to view the latest posts. Support for the newer privacy controls means that you can now configure location and visibility options for individual posts that you make. A redesigned news feed can also be used to check into places when you are out and about.

Another new gesture allows for easier navigation between images in galleries; rather than having to tap arrows to move from one image to another, you can simply swipe left and right. The Android version of the app is still not as complete as the iPhone version, but it’s getting there.

Much more user-friendly than the most Facebook web site, the Android app is a must-have for all social network users.