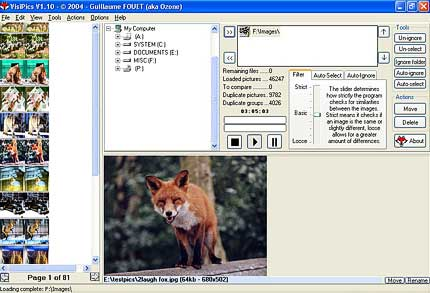 VisiPics is an interesting tool which can check your PC to identify and remove duplicate images.

The pictures don't have to be completely identical to be tagged by the program. It can also detect images which have been saved in different resolutions or formats, for instance, or where one has been edited in some very minor way.

While there are other programs which do similar things, VisiPics has a notable plus point in its wide file format support. As well as opening JPEGs, the program can also handle GIF, PNG, BMP, PCX, TIFF, TGA and even RAW files (although we wouldn't hold out too much hope for the latter, as VisiPics is relatively old - it's most unlikely to be able to open RAW formats from modern digital cameras).

It's also reasonably easy to get started with the program. At a minimum you can just add your system drive to the scan dialog, click Start, and it'll begin checking your drive for duplicate pictures. This may take some time as there's a lot of work involved, but the program does at least keep you up-to-date by always displaying in-depth information on what's happening as it runs.

And once the scan is complete then you can have VisiPics automatically decide which files to keep (it bases this on your choice of the file type, size or resolution). Or you can opt to delete files manually, at a click: that's certainly safer, though it'll also take very much longer.

If there's a problem here it's that VisiPics various settings and options aren't always straightforward, and the very basic help file doesn't do a great job of covering them. Which is a significant issue, especially in a program which aims to delete lots of potentially very important files. We don't think you're likely to run into difficulties, but be cautious anyway: pay careful attention to what you're doing in VisiPics, and don't use the program at all unless your system is fully backed up.

It's not been updated for a long time, but VisiPics is still a reasonably quick way to find and remove duplicate images from your PC. The documentation is a little sparse, though - don't start marking or deleting files unless you're 100% sure about what you're doing.