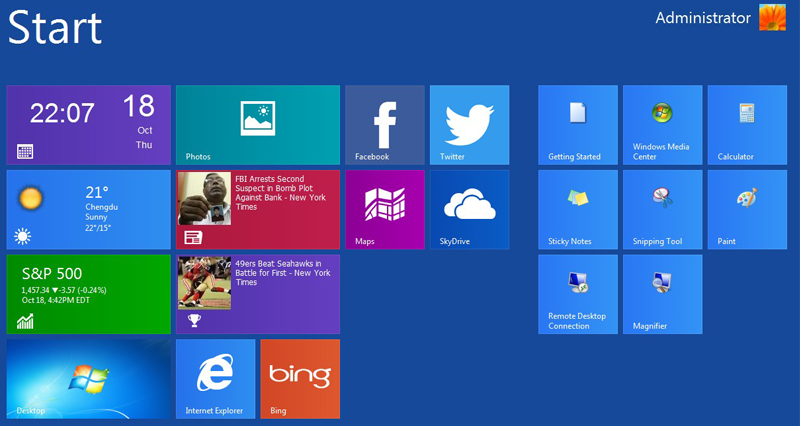 Much has been made about the new look of Windows 8 – formerly known as the Metro interface – and for many people this is going to be the reason they choose to upgrade. But there are a large number of Windows users who are perfectly happy with the way Windows 7 works, or can’t afford to upgrade just at the moment. If you fall into either of these two camps, WinMetro could be the utility you have been looking for.

This simple free utility enables you to bring the look of Metro to Windows 7 so you can reap the benefits of some of the interface changes to Windows 8 without the need to upgrade. The app has been very well implemented, and while it is not a perfect replica of how things are in Windows 8, it is certainly close enough. The redesigned Start menu is home to all of your shortcuts and these looks very much the same as in Windows 8.

The Start menu is access just like in Windows 8, by moving the mouse to the lower left of the screen and a copy of the charms bar can also be accessed at the right hand side. There are a number of widgets built into the Start screen such as a news ticker, weather forecast, and social networking elements, but there is little scope for customization here.

In some respects, it could be argued that WinMetro makes things slightly more awkward to get to, but at the same time this could just be because of the fact that the way Windows 8 works is mimicked so well. The search feature of the Start menu has been nicely implemented and this is sure to proof to be a great time-saver as well as working in a very pleasing way.

Not perfect, but not too much to complain about, WinMetro brings one of the biggest features of Windows 8 to older versions of Windows with style.

Customize the appearance of the Windows 8 Start screen

How to get brighter colors in Windows 10

Everything.me Launcher Adapts to What You’re Doing & Where You Are