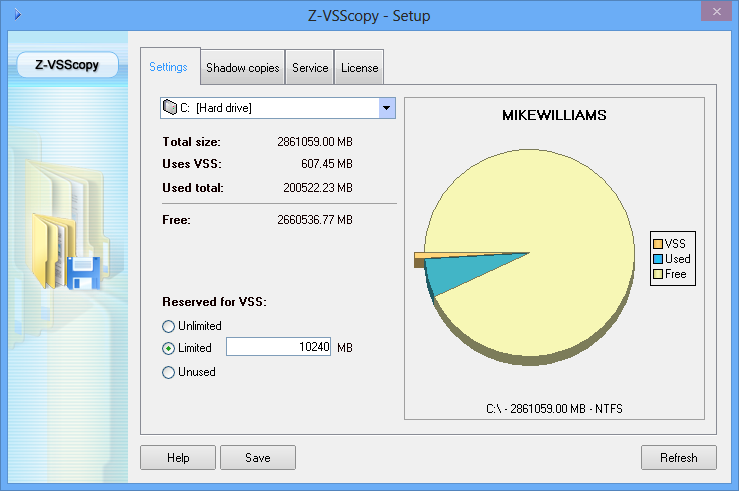 Z-VSSCopy is a simple tool which helps you view and access the files stored in your Windows shadow copies (VSS, a technology which makes regular copies of your data).

The program's straightforward tabbed interface opens with a chart showing you how much hard drive space your shadow copies currently require. If this looks like it could be too much, you're able to reduce the maximum amount of space they'll be allowed.

Clicking the "Shadow copies" tab displays a list of your current shadow copies, along with a series of buttons to help manage them.

The most interesting option is probably "Show", which displays the contents of the currently-selected shadow copy in an Explorer-type tree view. If you've accidentally deleted a file on your desktop, say, you may be able to find a copy here; right-click it, select "Export" and the file will be restored to its original location. (You can only select one file at a time, though - no multi-select, and no folders.)

You can also delete a shadow copy to save space. There are buttons to create new shadow copies and system restore points.

There's also a "Mount" button, which makes the shadow copy accessible from Explorer, but this isn't as useful as it sounds: it only works with shadow copies which Z-VSSCopy has created. The copy then appears, although as a folder rather than a drive, and there's no clear way to unmount it.

Z-VSSCopy provides an easy way to view the contents of your PC's shadow copies, and restore individual files you might need

Easily copy files - even if they're locked

Reclaim lost disk space on a USB key with imageUSB

FastCopy 3.0 ramps up your PC performance