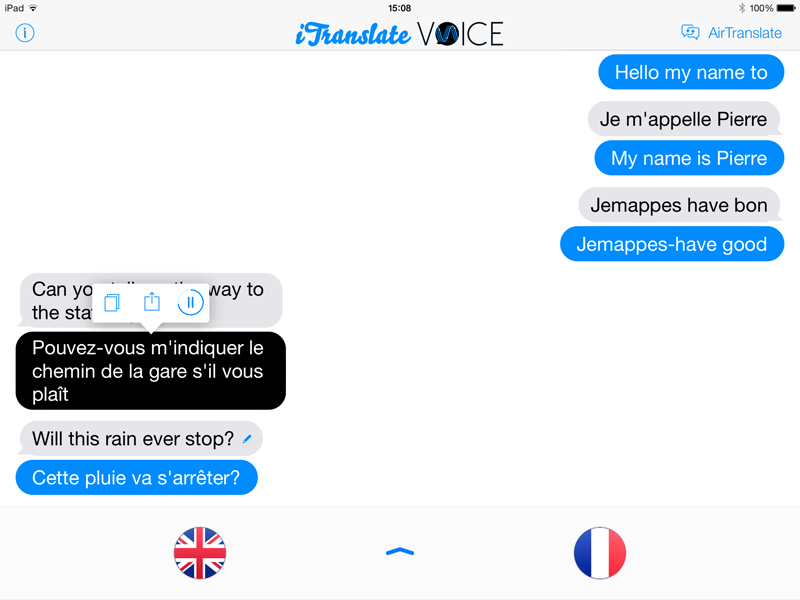 About to head off to a foreign country and need help with the local lingo? Need to speak to someone in an unfamiliar language? You could, of course, load up with phrase books and attempt to muddle by, or even try to learn the basics before you go, but there's no substitute for having a proper translator smooth things over and make yourself understood.

Of course, we can't all afford to pay for someone's services, but iTranslate Voice attempts – with some success – to fill the gap and turn your iPhone or iPad into a bona-fide translation tool. There's no typing involved – it's all done with the power of your voice, and by passing your iOS device back and forth or using the AirTranslate feature if both of you happen to have iTranslate Voice installed on your corresponding mobiles, you can more than get by.

It's simple to use: fire up the app and grant access to your mic when prompted. Note the two language buttons at the bottom of the screen: set the left-hand to your native language, and right-hand one to the language you want your words to be translated to – over 40 are supported.

Now simply tap your language's button, wait and then speak clearly; or tap and hold if you'd prefer to type your words or phrase instead. After a short pause, you'll see your phrase in English, the translated phrase below it and an explanation of what it is. You'll then hear a voice speak your phrase in the native language for your audience to hear.

They can then reply in kind, tapping their language button and speaking in the same way. You can edit the phrase by hand if it's incorrect – tap the green pen and type the correct one. As each person speaks, the screen clears to show only what's just been said, but you can scroll down to review your past chat history.

Some languages work better than others, while the app is more accurate if it's able to use your Wi-Fi or mobile connection to pull translations from over the net.

Thank you for using iTranslate Voice! To improve our App for you, we regularly bring updates to the App Store with improvements for both speed and reliability.