Free up gigabytes of space with this free Mac cleaning tool 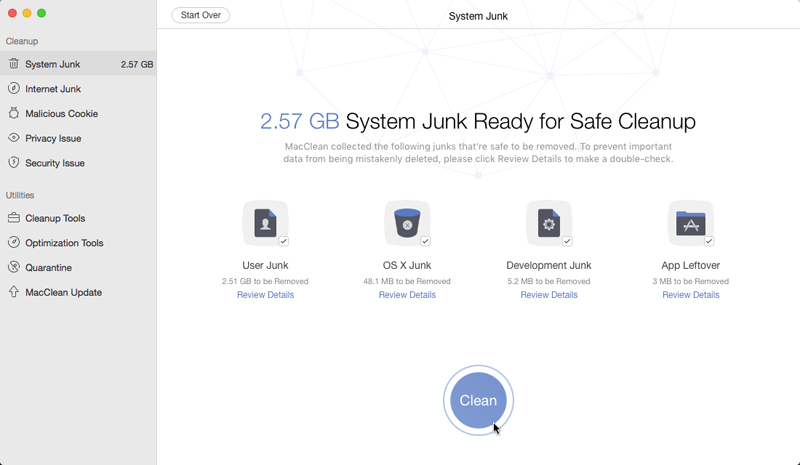 A clean Mac is a fast Mac, but these days, cleaning has as much to do with privacy and security as it does with keeping your files organised and hard drive free of junk files. That’s the logic behind the new version of MacClean, a free app traditionally associated with cleaning junk files and providing you with some system tweaks to boot.

MacClean now returns with a completely new user interface where the focus is as much on protection as it is cleanup. It’s also beautifully flat, designed perfectly for the more minimalist look of modern-day OS X. The app is divided into two broad sections: Cleanup and Utilities. Cleanup showcases two tools for scanning for 'junk'´(system and internet), plus options for rooting out malicious cookies as well as reviewing other potential privacy and security issues.

The latter option prompts to download an additional security engine and database update. This is basically the open-source ClamAV scanning engine, which runs on demand only – it’s thorough, but painfully slow (unlike the rest of the app), and ties up MacClean while running. If you’ve already got security software installed, feel free to skip the process unless you want to occasionally get a second opinion. If anything gets found, it’ll show up in the Quarantine section under Utilities.

Some of these tools are used as part of the main scan, but others add extra weight to what is already an impressive free package. Some form of backup would be nice – in case you make a mistake – but unlike some cleaning tools, you will at least get a confirmation dialog each time you click Clean, preventing you from making a potentially costly mistake.

If you’re struggling to free up drive space quickly and relatively safely, MacClean is well worth adding to your Mac’s utility arsenal.

Tighten your privacy against trackers with this free tool

Clean traces of your computing activity with this web cleanup tool

MacClean 3.0.5 promises to improve security and privacy as well as clean your Mac