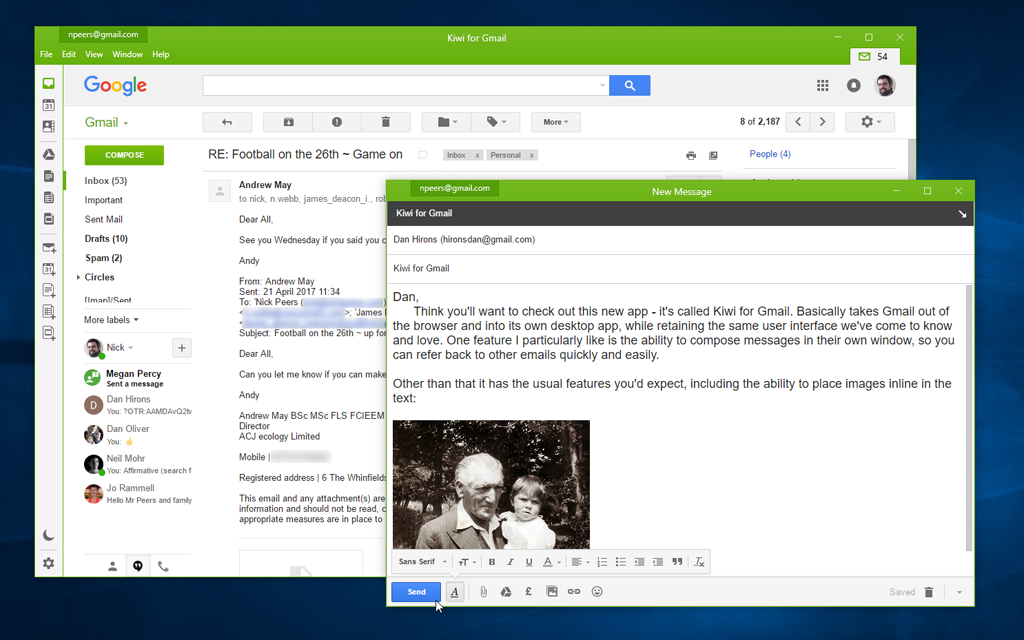 In the cloud-connected 21st century, Google is currently king. Chances are you’ve got Gmail for email and make use of Google Drive and its associated apps for storing files and working on the go. But while there are dedicated apps for accessing these features on your mobile, what about the desktop?

Rather than tie up your web browser or make do with a third-party email client such as Thunderbird, Kiwi for Gmail aims to provide you with a dedicated app that gives you access to a wide range of Google services depending on whether you stick with the free Lite version (Gmail, Calendar, Contacts) or shell out for the Premium version (Lite features plus G-Suite, comprising Google Docs, Sheets and Slides, plus Google Drive).

The app doesn’t try to reinvent the wheel – at first glance it’s little more than a wrapper for the web-based interface, so will be instantly familiar to those currently accessing Google services through their browser.

That does it a disservice though, because Kiwi for Gmail basically integrates these services into your desktop, with support for multiple windows and – in the Premium version – up to six separate Google accounts. It also provides desktop shortcuts for Docs, Sheets and Slides to make the G Suite a contender for your default office tool.

If all you want is a dedicated desktop front-end for Gmail, then the Lite version is sufficient, offering desktop notifications, separate window for composing email and the ability to make Kiwi your default mail handler.

If you want to juggle multiple accounts or integrate G-Suite into your desktop, then the Premium version costs $29.99 a year on Windows (Mac users can get it for a one-off $29.99 through the app store). Other benefits of Premium include the ability to restore windows on restarting, support for keyboard shortcuts (and Chrome-based Gmail plugins) and the ability to directly open Google App files from the desktop.

Premium users on Windows also gain two exclusive features not (yet) found on the Mac, both of which aim to make the program less intrusive. The first is an “Important Only” notifications setting that allows you to prioritise alerts, and a “Do Not Disturb” feature for setting aside quiet time.

Everything works slickly and as you’d expect – if you’re a Google aficionado and want to separate its mail and office features from your browser, then Kiwi for Gmail is well worth taking for a road-test.

A slick way to integrate your Gmail account (and potentially G-Suite itself) into your desktop without having to adapt to a different user interface.

A Gmail extension for Chrome to reveal more about your contacts

Save Gmail emails to PDF or ZIP with a click

Kiwi for Gmail 2.0 arrives on Windows, runs Google services in a desktop app