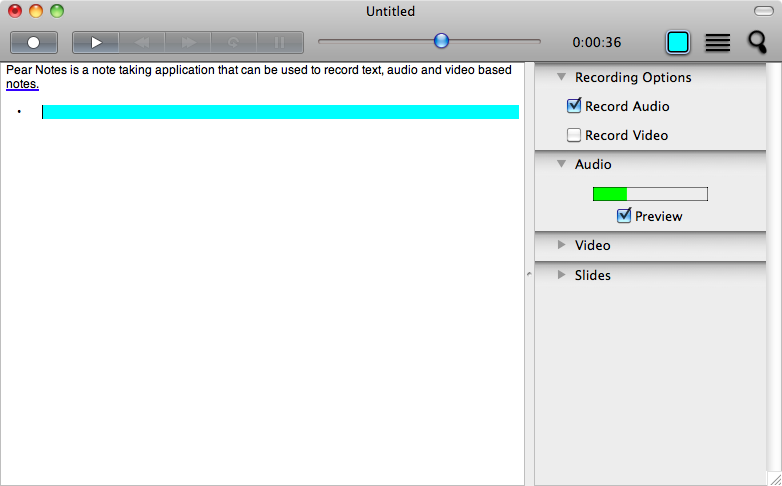 Note taking applications tend to be text and image based, but Pear Notes takes things a stage further by also enabling you to record audio and video. This in itself may not seem like anything special, but audio, text and video are treated as one which means that when a note it viewed or played back, you can see what was being typed at a particular point in the video.

A playback slider can be used to jump through a note recorded in the program. As the video moves forward, any text notes that have been created at the same time benefit from word highlighting so you can see how the two components correspond to each other.

When you have created a large number of notes, Pear Notes search facility comes into its own. As well as using a Spotlight style search to home in on notes that include certain words, dates ca also be used to make it easier to locate audio and video based notes.

If you have already created PowerPoint or Keynote presentations, these can be incorporated into a note by simply dragging and dropping them into place. The same can be achieved with PDF files, saving the hassle of having to re-type information that has already been added to another document.

An incredibly versatile tool which goes far beyond the capabilities of many alternative note taking applications.

Screen recording tool that is a complete doddle to use

A note-taking app that has all of the bases covered

Forget your paper notepad, use PaperDesk to take notes and draw pictures