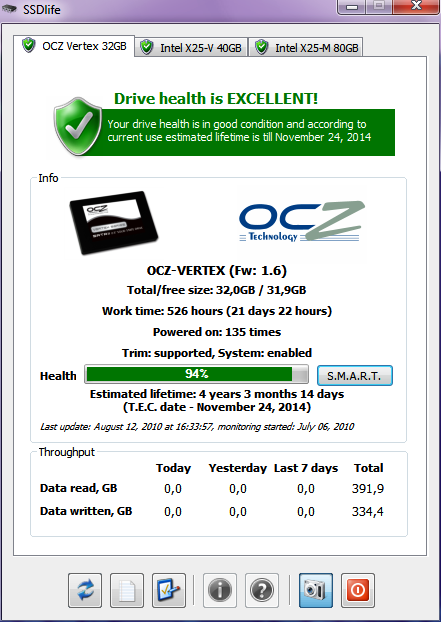 SSD Life is a simple tool that aims to give you an estimate of when your solid state drive will expire.

There's no great complexity to it: just open the program, it will automatically detect your solid state hard drive if you have one, then estimate its lifetime based on the drive type and current use.

Or, at least, that's the plan. When we tried it the program told us that "according to current usage lifetime is (calculating)", and stopped right there. So it seems the program does have a bug or two.

That's no surprise, though, as it's only version 0.4. And even with that figure missing, SSD Life has a few other useful features. It can tell you if a drive supports the TRIM command, for instance; display how much time the drive has spent working; and give you basic S.M.A.R.T. stats to help you manually analyse system health.

There is also a PRO version of the program, which the authors say adds extras including "the possibility to run disk checks (scheduled) in the background mode, display detailed information about SMART attributes and tweak the system for use with SSD drives". Find out more on the SSD Life site.

+ For Samsung 830 support for writen bytes statistics has been added.
+ Added support for AData S596, Corsair Force, Force GT, Performance Pro, Plextor PX-M2P, PX-M3S, SanDisk P4.
* Fixed support for MacBook Air.
+ If the disk does not report detailed information about the condition (wear), then we portray the general state, good/bad by the general status SMART.
+ If the disk does not support read/writen statistics, then we inform the user about it.
- The web-report function is temporarily disabled.

All SSD drives will "wear out" eventually, so figuring out when this might happen could save you a great deal of hassle. We're unsure how accurate SSD Life's estimate will be, but it's better than nothing - give the program a try, see what it says about your drive

Be alerted to possible hard drive failures, before they happen

Monitor your hard drives for the signs of imminent problems

Add new capabilities to VirtualBox with this extension pack