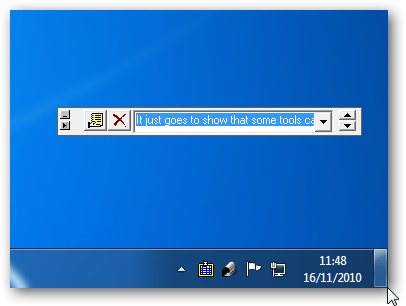 It just goes to show that some tools can defy time as MiniCLIP was originally written when Windows 95 ruled the waves. Yet, here we are in the second decade of the 21st century, and this handy little clipboard tool is still going strong, capable of running on the latest 64-bit builds of Windows, albeit only when run as an Administrator.

It’s fair to say that MiniCLIP is functional rather than spectacular: but despite its retro looks, it does pack in some useful features. It’s capable of storing multiple text items from the clipboard, which can be easily retrieved from its taskbar, which can be pinned to the Windows Taskbar or left floating on top of other windows – just click and drag it into position. From here, just click the drop-down menu to select your chosen snippet of text from the list and press [Ctrl]+[V] to paste it back again.

Individual entries can be edited and deleted using the buttons on the taskbar, and if you click the tiny > button on the left you’ll unearth a load more useful features: Calculator, Web Bin (where copied links are automatically mirrored for accessing via your browser quickly and easily), ClipBook (a place for frequently entered text snippets to be permanently stored) and Quick Replace, which enables you to input long passages of text using shortcuts in a fashion similar to the AutoText feature found in Microsoft Word.

The program’s home page is buried away on the Media Chance website, but it’s well worth a visit for an in-depth overview should you decide to give this particular clipboard replacement tool a spin.

A capable - if basic - clipboard replacement tool that's finally starting to show signs of its age (not bad for a program nearly 15 years old)...

Run the program as an Administrator in Windows 7 and Vista to avoid compatibility issues.