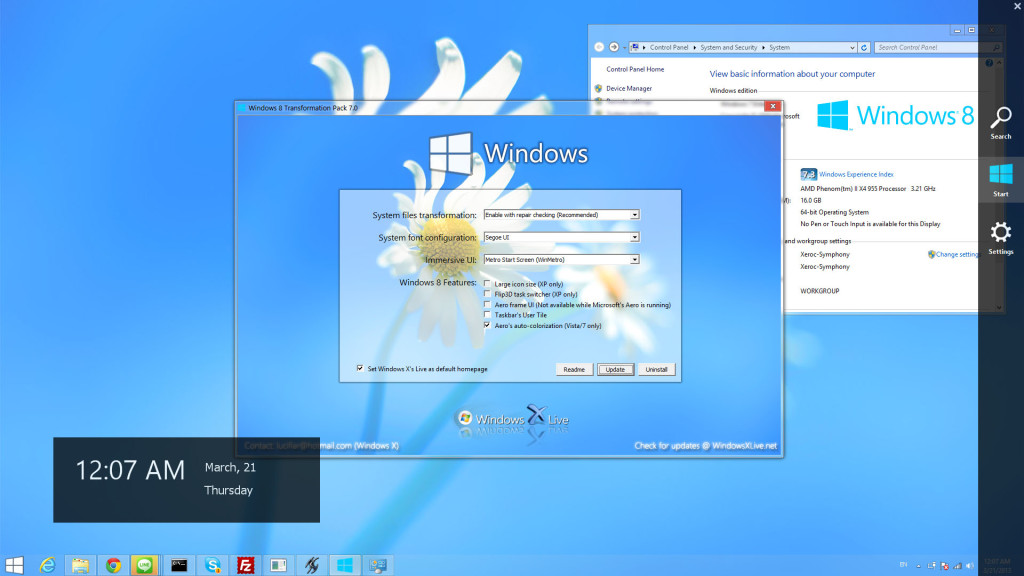 Every new version of Windows involves adapting to change, and Windows 8.1 is no different, with a radical new look as it attempts to bestride tablets and phones as well as your laptop or desktop. If all you want to do is preview the new look and some of the tools on your Windows 7-powered PC, try the Windows 8 UX Pack.

If you’d like to emulate the look on an earlier version of Windows, you’ll need this Windows 8.1 Transformation Pack tool instead. It takes the UX Pack and adds in a number of extra elements that emulate key aspects of Windows 8.1 already built into Windows 7 such as the translucent Windows Aero interface. Basically, if you want to get the Windows 8.1 look in Vista, XP or Windows Server, you need this instead.

Installation is simple enough: extract the setup file from the zip archive, then double-click it to get started. If you’ve installed the pre-requisites .NET Framework 4.5, plus .NET Framework 2.0-3.5 if you’re running Windows Server or the 64-bit version of XP) you can select what to install and then click Install to see if the program will be able to supply you with the features you desire.

Be patient, it can take a while to apply everything, and it occasionally appears stuck, but persevere and if all works you’ll be prompted to reboot at which point you’ll be able to get a feel for Windows 8.1.

For Vista and Windows 7 users, the changes will be largely superficial, with access to the Metro-like user interface and various gadgets the big attraction. XP users will notice the most radical changes, with a completely revamped interface to contend with. You may encounter glitches – if these prove too troublesome, or you decide the new look and feel isn’t for you, just re-run the setup tool to remove it from your system.

A surprisingly elegant and effective way to give your ageing version of Windows a major makeover, but you may encounter the odd glitch. And make sure you back up your PC first.

Neil, we've just updated the screengrab to reflect the changes in v4.0.