A powerful and user-friendly image editor with 8BF filter support 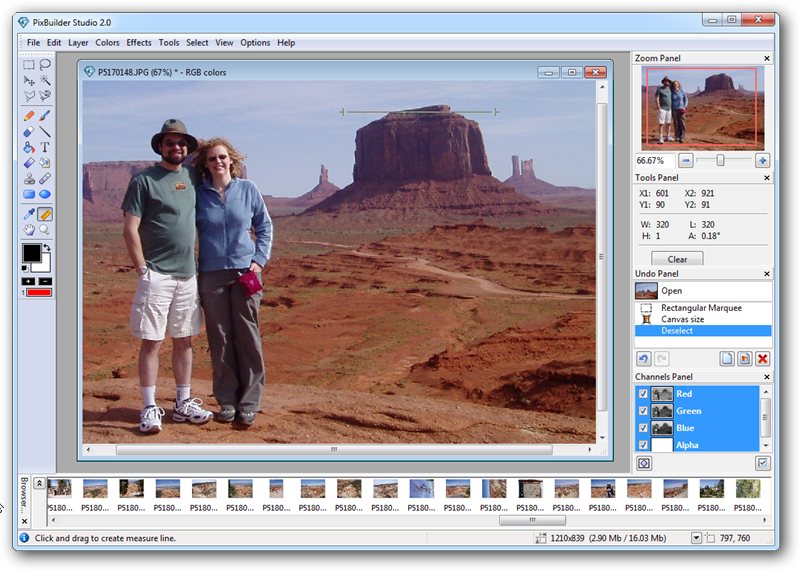 Think of free image-editing software for Windows and you’re immediately drawn to either The GIMP or Paint.NET. Both are very capable packages, but have niggles and drawbacks. The GIMP’s user interface can be off-putting, while Paint.NET’s development is firmly focussed on version 4.0, which isn't due to be released until some unspecified point in 2012.

PixBuilder Studio is closer to Paint.NET than The GIMP in terms of its looks and functionality. Like Paint.NET, it places its tool selection on the left, and a selection of tool palettes on the right. These are pinned to the program window, but can be easily dragged off to be transformed into floating windows like Paint.NET or kept as they are, ensuring they always stay in the same place however you resize the program window.

The tools are comparable with Paint.NET, but there are some useful extras: a healing brush for example, and we like the fact the move selection tool is built right into the selection tools themselves, so you can immediately reshape and resize your selection after creating it. A number of tool palettes on the right – zoom, layers, tools, channels, colour and undo – plus the option of a browser panel at the bottom of your screen also help to aid navigation of the program.

PixBuilder Studio fully supports layers, although disappointingly it won’t import layers from Photoshop PSD files (instead the file is imported flattened). By default, the program supports only a limited number of filters, but version 2 introduced support for 8BF filters, so you can easily extend the program’s capabilities, although it is a little annoying having to do so when Paint.NET comes with so many more included.

The program is effortless to use and features some useful tools that you won’t find in other free apps – and if you’re still unsure as to whether it’s good enough to replace your existing image-editing app, you’ll be pleased to hear that version 2.0.3 introduces a “portable” option when installing the program, so you can roadtest it without cluttering up your Registry or programs folder.

A decent and powerful tool that’s well worth checking out if you’re becoming frustrated with your current image editor.