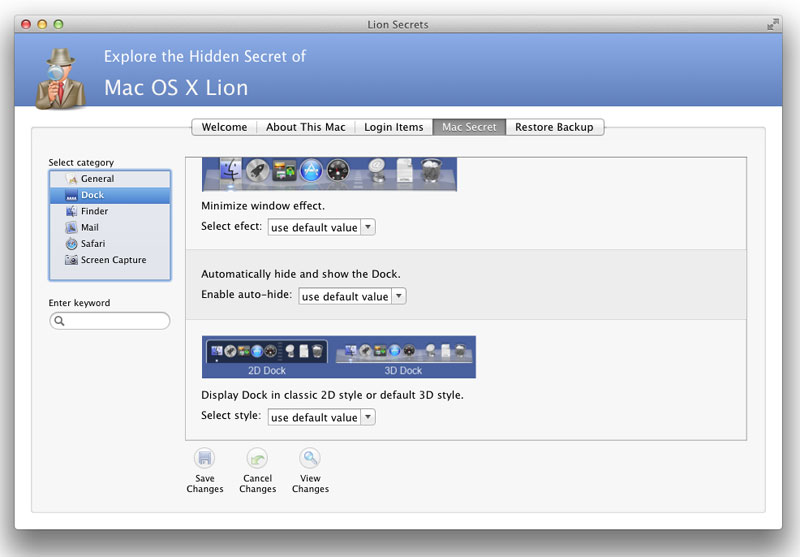 Not everyone is enamoured with the latest version of OS X. Lion proved to be one of the most divisive versions of OS X yet, with certain settings changed that infuriated those used to working a specific way.

Thankfully, many of these annoyances can be disabled, but knowing where they are and how to switch them off can prove a frustrating experience. Lion Tweaks was one of the first tools on the scene to provide one-click remedies to some of Lion’s quirks, and this tool aims to do something similar.

Perhaps realising that Lion Tweaks has already carved a successful niche for itself, Lion Secrets takes a different approach, utilising multiple sections and tabs to divide up various tweaks and settings into separate categories.

Not all tweaks covered by Lion Tweaks can be found in Lion Secrets, but conversely, it features some useful tweaks not covered by the former. While some of these aren’t specifically issues introduced with Lion, they are potentially useful: there’s a Login Items tab for streamlining your startup applications for example (it’s basically a duplicate of that which appears under the Users System Preferences pane).

You can also monitor, kill and reload Processes from the About This Mac section, but the bulk of the tweaks are found in the suitably titled Mac Secret section, divided up into six categories: General, Dock, Finder, Mail, Safari and Screen Capture.

The number of specific tweaks in each section varies, but they’re accompanied by explanations of what each tweak does and – in some cases – an actual illustration. Any changes you do make are automatically backed up, and you can roll back your tweaks via the obviously titled Restore Backup Tab.

If you’re looking for a direct rival to Lion Tweaks, you won’t find it here. However, seeing as it’s free – and that a version 2.0 with presumably more settings included – is promised soon, there’s no harm in installing both tools and getting the best of both worlds.

An interesting tweak tool that goes beyond offering "fixes" for annoying Lion features. Well worth checking out.

Some of the new Lion improvements can be distracting, use this tweaking tool to switch them off

Take control of which apps appear in Lion’s Launchpad

Transfer your files and settings from OS X Leopard to Lion