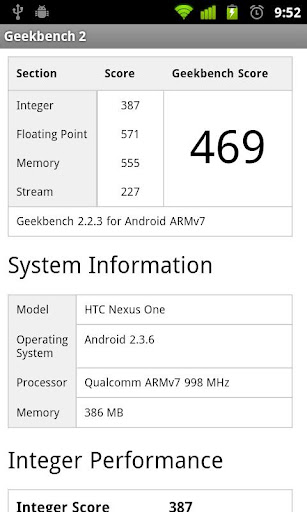 It used to be the case that benchmarking software was only available for desktop computers – PCs and Macs – but the surge in popularity of mobile devices mans that developers have been inclined to produce similar tools for mobile platforms. Geekbench is a well-respected benchmarking tool that is available for Mac, Windows and Linux, but there are also mobile versions available for Android and iOS.

The hardware market for Android devices is far more varied than for iOS and it is likely that you are unaware of just what hardware is to be found within the casing of your phone or tablet. The opening screen of the app reveal basic information about the system it is being run on such as the version of Android that is installed, what make and model of hardware is being used and the name and speed of the processor that is installed.

But things start to get a little more interesting when you select the option to run benchmarks. In doing so, you opt to put your Android device through its paces after which it will be assigned a rating so you can see how it compares to other devices in different areas. By performing test on integer and floating point processing as well as running memory tests, each area of your device can be given a rating and from this you can learn the overall rating for your device.

This is a great app for settling arguments about who has the fastest mobile, but it also provide you with a useful way of determining whether any of those tweaking tools you have been using are actually doing their job properly. Should you find that the figures returned by the benchmarks are significantly lower than expected, this could be indicative of a hardware problem that you should investigate.

While not quite as informative as the desktop app, this is still a useful tool for the curious mobile user.