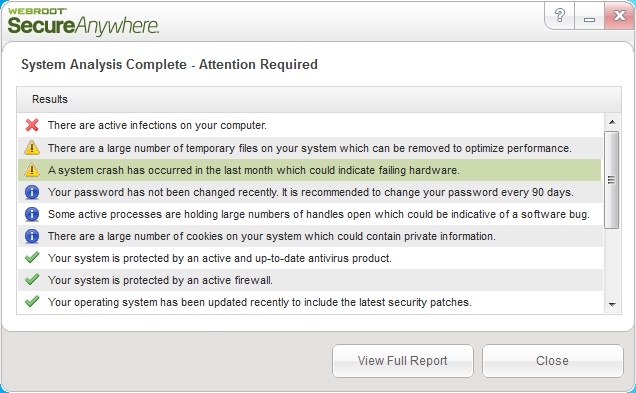 Webroot System Analyzer is a portable system information tool which can quickly highlight potential problems on your PC.

The program could scarcely be any easier to use. There are no menus, no toolbars, no complex options or settings to get in your way: just download the System Analyzer executable, run it, click Begin Analysis and watch as the program scans your PC (which itself only took around a minute on our test PC).

The System Analyzer summary report then highlights any significant problems. We were told that there were "active infections" on our system; that there were a lot of temporary files on the system; that a recent system crash could indicate "failing hardware"; and that some active processes were holding large numbers of handles open, which could indicate a bug (and may lead to crashes in itself).

Sounds good. Until you want to find out more, anyway. The only way to do this is to click "View Full Report", which opens a text file in Notepad, and doesn't actually tell you much useful.

We wondered which crash "could indicate failing hardware", for instance, but all the "Full Report" did was list the date and times of three recent system crashes, and point us to their minidump files. If you've no idea what to do with those then you'll be left none the wiser.

And where exactly were all our excess temporary files located? System Analyzer didn't tell us that, either - the Full Report simply displayed the total amount of drive space they were taking up.

If you're a PC novice, then, you'll be left confused by the lack of explanation here.

But if you're an experienced PC user, particularly one who regularly helps out on other people's PCs, Webroot System Analyzer could at least be useful as a quick way to get an initial health check on any given system.

System Analyzer provides a quick and easy way to get a basic health check on just about any Windows PC. Just don't expect the program to provide much in the way of detail on any of the issues it identifies.

Webroot System Analyzer: a quick and easy way to check any PC for problems