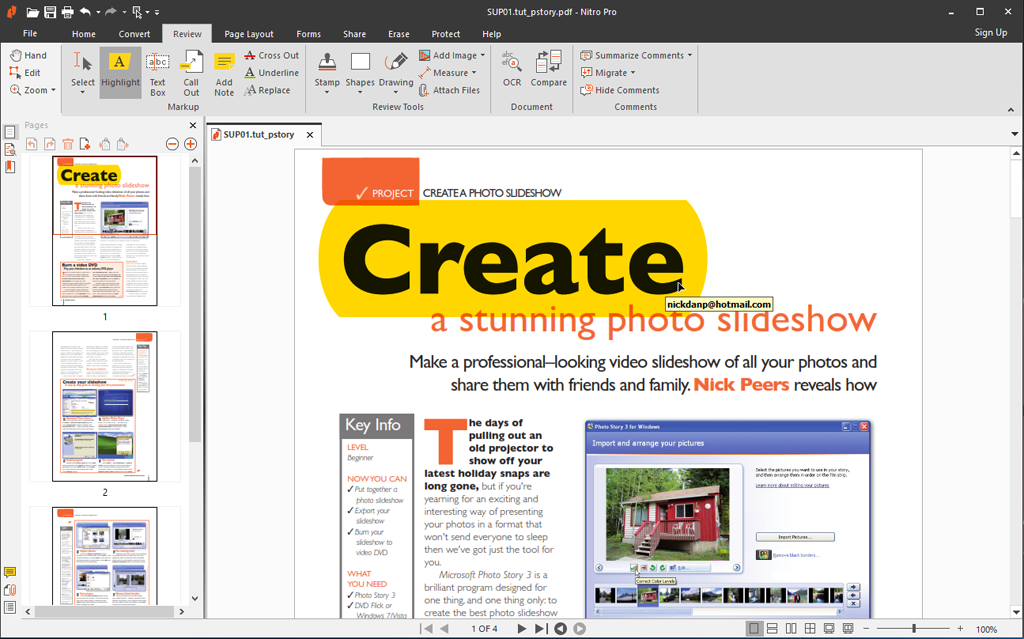 Nitro Pro is a powerful tool for creating, editing and converting PDF documents. Unlike free products, Nitro Pro’s PDF creation tools are capable of producing editable files from the likes of Word and Excel documents, while it also comes with a serviceable OCR engine for scanning in editable versions of paper documents too. This improves with each release, and version 10 introduced an auto de-skew function and improved text, images and table recognition.

Nitro pairs this functionality with a set of powerful editing tools, with both line- and paragraph-based text editing possible alongside the ability to swap out or insert images. Throw in form filling, collaboration tools and the ability to combine PDF files from multiple documents, and you have a tool that – if not quite the equal of Adobe Acrobat – is more than capable for most people’s needs at less than a third of the price, even after the recent price rises.

Nitro Pro’s interface is tied in closely to Microsoft Office 2019, sporting the same user interface to provide familiarity for those moving between the two apps. These close ties mean Nitro also ships with plugins for Word, Excel, PowerPoint and Outlook, compatible with 64-bit iterations of Office as well as 32-bit versions.

Unsurprisingly, Nitro Pro is also tightly integrated with Nitro Cloud, the company’s web-based service for sharing and collaborating on PDF documents with other users. The latest version also fully integrates with Google Drive, OneDrive and Dropbox too, giving you access to your cloud-hosted files via convenient shortcuts in the File tab.

If Nitro Pro has any single headline feature, it has to be its Batch Processing tool, which follows on from version 9’s time-saving Batch Print tool to allow you to perform multiple actions on a group of documents.

The tool itself works perfectly: build a collection of actions into sequences, which can be saved for future use (and cloned as templates for other sequences). These can then be performed on one or more documents with just a few clicks.

Nitro Pro also enables you to create PDF Portfolios, basically wrappers (like zip files) into which you can store any kind of file for archiving purposes. It also adds support for the PDF/A format, which was designed to provide a format capable of digitally preserving documents through the use of forced standards such as font embedding.

The search box is now floating rather than fixed – press [Ctrl] + [F] to access it, and a new Advanced Search sidebar that provides you with context for search results. Users can also now drag-and-drop pages between open documents using the Pages sidebar to arrange them. Other improvements include single-click editing, more options for the Crop tool and a new Optimize PDF dialog box.

Nitro Pro continues to age like a fine wine, offering more than enough features and power for most people’s PDF creation and editing needs. And with a lifetime’s license costing less than an annual subscription to Adobe Acrobat, what’s not to like?

Nitro Pro provides a good blend of innovative new features and refinements, but while the upgrading pricing remains competitive, new users may be put off by its increasingly large price tag.