An extended version of the Windows Run box 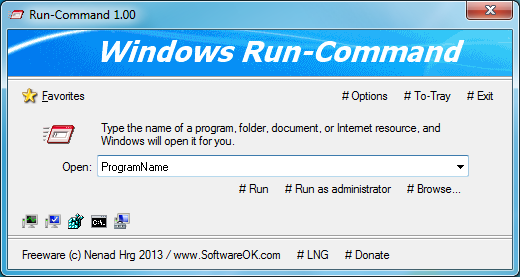 Run-Command is a tiny, portable and more powerful version of the Windows Run box.

You can use the program just like the regular Run box. Launch it, type a program name (or browse to it), press Enter and it'll appear.

There's also a button to run your specified program as an administrator, though. (You can do this from the regular Run box by entering a program name and pressing Ctrl+Shift+Enter, but this is certainly easier.)

There are quick ways to launch commonly-used tools. So for instance Run-Command has built-in icons for Regedit, Cmd.exe, the Computer Management and System Properties dialogs, and more.

There's even a customisable Favorites system, which acts something like a mini Start menu. It comes with built-in links to many system tools, but you can also add more of your own.

The program does its best to stay out of your way, by default minimising to the system tray. But it's easy to launch via the regular Win+R key (although you can change this to whatever you like). Background RAM use is reasonable at around 7MB. And as usual with SoftwareOK products, there are no annoying .NET or other dependencies - it runs on anything from Windows 98-8.

There is also one particularly serious problem. On our test PC at least, launching Run-Command would turn on the display of icons on our desktop (don't ask us why). If you have icons displayed anyway, this won't be an issue, but if you've turned their display off then it'll quickly become irritating enough to become unusable.

This may not happen everywhere, though, and otherwise Run-Command is a useful tool. So if you're at all interested in the idea, don't let this put you off: just download the program and give it a try.

Run-Command has a bizarre bug which will annoy some, but if you're unaffected then it'll prove a useful enhanced Run box with some powerful features

Added support for file names longer than 260 characters (I was convinced that it was an unsurpassable limitation of Windows and instead seems not).
Fix various.

Easily find, install and update free software for your PC

Highly customisable launcher that harnesses the power of the keyboard

A stylish dock for launching programs, web pages and more

An alternative app launch for OS X, activated with a mere gesture

Simple tool to launch applications on your Mac

An alternative launcher for OS X with a raft of extras

Cerebro is a keyboard-friendly launcher and search tool

Wox is a versatile launcher for Windows