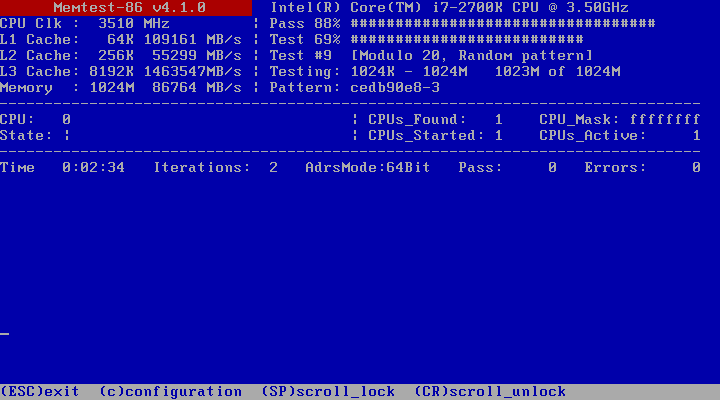 MemTest-86 is a simple but thorough tool which will scan your PC's RAM for errors. It's been around for almost 20 years, but is still being updated to fix bugs and ensure it works with the latest hardware (which includes both 32 and 64-bit systems, so don't be concerned about the "86").

The program comes in the form of an ISO image, so it's not quite as convenient to use as some of the competition. You'll need to use another program to burn MemTest-86 to disc (or create a bootable USB key) before it's ready for use. But once you have made those preparations, everything else works very well.

MemTest-86 boots immediately, for instance. There's no complicated operating system which needs to fire up, first - you're straight into the program's simple text-based interface. A menu offers a selection of test options, but you don't even have to worry about that: just wait a few seconds and the default test pattern will begin.

The screen then updates to show you exactly what's going on, the various tests that are being used. It's fairly technical, but if nothing else the "Pass %" and "Test %" will show you how far through the checks you are. And again, there are a lot of error types which could be reported at the end of the test (MemTest-86 is very thorough and detailed), but you don't really have to understand those, either. If you see any errors, there's a problem with your hardware; if you don't, your issues are probably somewhere else.

Monitor your PC’s RAM use with Memory History Tool