Keep using Windows Live Messenger even after Microsoft shuts it down 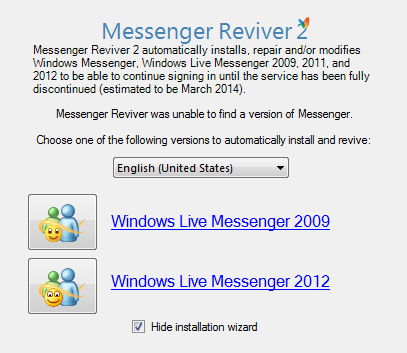 All good things must come to an end, and when Microsoft acquired Skype it was only going to be a matter of time before the likes of Messenger and Windows Live Messenger bit the dust. But just because a service has been terminated, it does not mean that you have to stop using it. If Skype is not your IM client of choice, Messenger Reviver 2 enables you to tick with the software you know and love.

When you run the program it will check to see whether or not you have a version of Messenger installed. If you do not have it, the software will be downloaded for you. If the program is already available, it will be modified so that you will no longer be forced into upgrading to Skype.

At its heart, that’s all there is to Messenger Reviver. It simply enables you to keep using Messenger by blocking the upgrade to Skype. It can be used with Windows Messenger as well as the 2009, 2011 and 2012 versions of Windows Live Messenger, so no matter which edition you like to use, there is an option available to you.

Once up and running, your modified  version of Messenger can be used to chat with other people who have also made use of Messenger Reviver, as well as those who have decided to make the switch to Skype. It’s not clear whether the program will continue to work indefinitely, but even if it does not, you are at least extended a little extra time to work with your preferred chat client.

Microsoft’s Messenger tool is given a new lease of life despite attempts to kill it off.

A speedy web browser with a focus on security and privacy