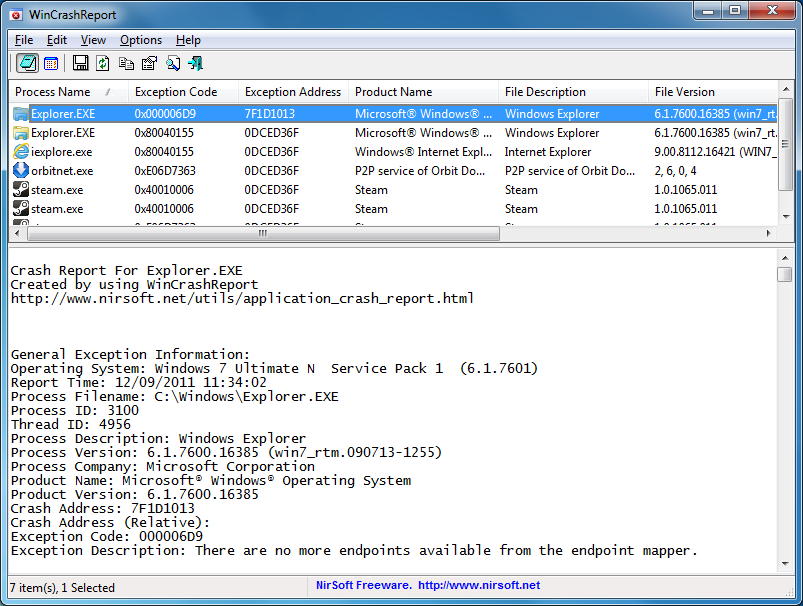 WinCrashReport is a portable tool which can provide a great deal of extra information about recent crashes on your PC.

To use the program, just run it and choose the relevant report from the top pane. (Don't see anything? Click Options > Show Internal Exceptions.)

WinCrashReport will immediately display core information, like the time and date of the crash, the process that's failed, the specific error message, and so on. Which of course can be useful if, say, another user of the PC has told you about the crash but couldn't remember too many details.

What's more interesting, though, are the extra details, like the "Strings in the stack". If the crashed program failed when it was trying to access a particular file or web URL, say, you may find that information here, invaluable for troubleshooting the core problem.

WinCrashReport also lists the call stack, which shows you which DLLs and other files were being used at the time of the crash. If you ignore the core Windows DLLs, like kernel32.dll, GDI32.dll and so on, then what's left may again point you at the cause of the crash.

There's plenty more here, including a list of all loaded modules, all active threads, CPU registers and stack data.

And if you want to save particular reports for analysis elsewhere, then it's possible to export data in text or HTML formats.

While it's targeted at developers and other Windows experts, WinCrashReport can also provide most PC users with handy clues on exactly why their PC is crashing

Is your PC unstable? Find out more about recent application crashes with this tiny error reporting tool