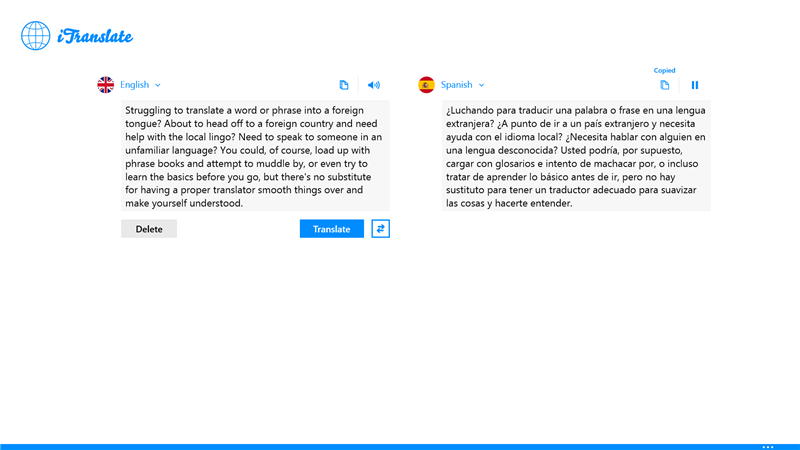 Struggling to translate a word or phrase into a foreign tongue? About to head off to a foreign country and need help with the local lingo? Need to speak to someone in an unfamiliar language? You could, of course, load up with phrase books and attempt to muddle by, or even try to learn the basics before you go, but there's no substitute for having a proper translator smooth things over and make yourself understood.

Of course, we can't all afford to pay for someone's services, but iTranslate attempts – with some success – to fill the gap and turn your Windows RT tablet or Windows 8 PC into a basic translation tool. It’s not as sophisticated as the iOS version – there’s no support for speaking into the microphone with this initial release – but at a push, if you’re doing this on a tablet you could embark on a slow, but accurate conversation between you and your chat partner by handing the mobile back and forth.

It's simple to use: fire up the app. Note the two language buttons at the bottom of the screen: set the left-hand to your native language, and right-hand one to the language you want your words to be translated to – over 40 are supported.

Next, type your word or phrase, then wait for iTranslate to deliver a written translation back at you in your chosen language. Tap the mic button and you can hear it too, helping you pronounce your words correctly. Enter a single word with more than one meaning, and iTranslate will provide different translations based on those different uses.

Some languages work better than others, and you’ll need an internet connection in order to allow the app to translate via the cloud, which could be a problem if you plan to use it on the road.

The app is also ad-supported – to remove these, plus get translate unlimited phrases, an in-app purchase is available for $4.99.

It’s overshadowed by the more fully featured iOS release, but iTranslate for Windows gets off to a good start and could prove itself when you’re struggling for the right foreign phrase to use.