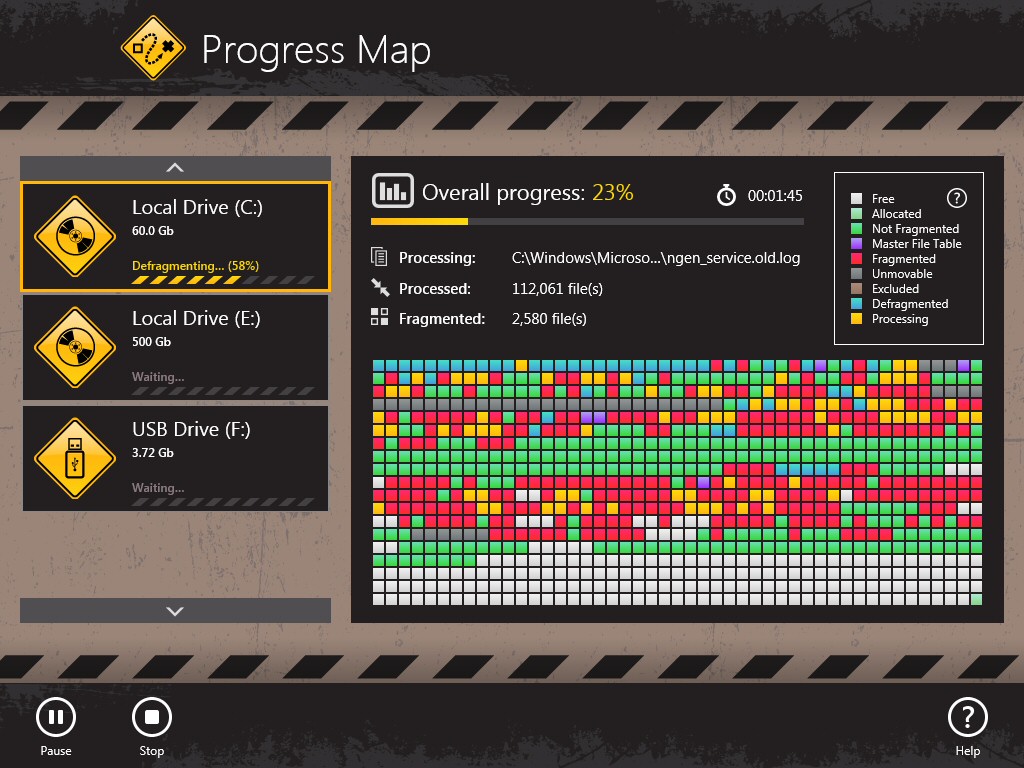 Auslogics Disk Defrag Touch is an unusual disk defragger built for touch-screen computers (although it runs just fine with a mouse and keyboard, too).

The program has a very Windows 8-like interface, and we don't just mean "it uses a few colorful tiles". It takes your full screen, has the same bold look to the interface, similar layout for its options, and you can swipe left or right on a touch screen, spin the mouse wheel or drag the mouse left or right to see what else is on offer.

Get past the visuals and defragging works more or less as you'd expect. You choose a drive; analyse it, launch a quick or full defrag; and then watch as the usual drive map keeps you up-to-date with progress.

Performance is great, as the program is based on Auslogics' regular disk defragger. But if you still don't have time to run a full defrag, no problem: Auslogics Disk Defrag Touch also includes an "Optimize Programs" section which appears to defragment files relating to a particular application only.

There are some useful tweaks and settings. You can have the program delete temporary files before defragging, speeding up the process. An option to skip large file fragments also improves defrag speed without making much difference to your final system performance. Or you might tell the program to move system files to the beginning of the disk, which means defragging could take a lot longer, but you should see a faster system afterwards.

A simple scheduler then makes it easy to run all this automatically, every day, week or month, or when your PC is idle.

And, slightly bizarrely, there's a game-like "levels" scheme where you earn tokens for using the program, recording achievements, improving your status, unlocking secret features, and collecting tokens which apparently you'll be able to "redeem later". (For what? We've no idea.)

Auslogics Disk Defrag Touch is smartly designed, as close to the Windows 8 look as we've ever seen from a desktop application. Its full screen interface is annoying when used with a mouse, but works well on a touch screen, and the program's capable defrag engine does a good job of optimising your drive.

Optimise your hard drive's performance with this fast and free defragger

Ramp up your PC's performance with this very configurable defrag tool