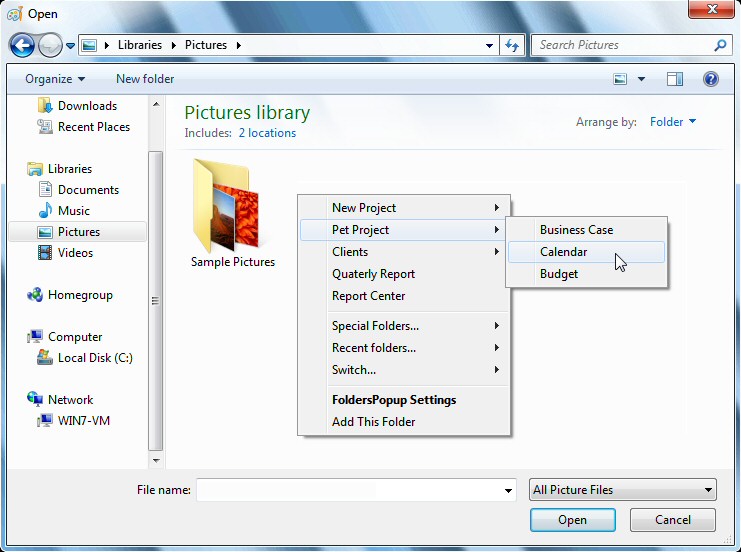 FoldersPopup is a well-designed tool which makes it easier to browse to your most frequently-used folders.

Suppose you're in an application, for instance, and click File > Open, Save As, Export or just about anything else file-related. If your target folder is far away then it could take quite a few clicks to find it. But with FoldersPopup running, just middle-click the mouse or press Win+K and a menu appears with various shortcuts. Common folders like Desktop, Documents, \Windows or \Program files are a click or two away, your most recent folders also appear on the list, and once you select something the Save As dialog updates immediately.

This isn't just about Open and Save actions. FoldersPopup can also be used within Explorer as a quick way to switch folders. Or if you're at the desktop and need to check the \Program Files folder, you can have the program launch Explorer there (or anywhere else on your list) in a flash.

Best of all, this even works at the command prompt. So there's no more typing a really long path, only to realise it contains spaces and you missed the quotes: just activate FoldersPopup and choose your folder with a couple of clicks.

The program delivered great results for us, but if you've any problems then there are plenty of settings and configuration options. In particular, you're able to set custom hotkeys or mouse actions for every FoldersPopup feature. And you're not restricted to a single list of "favourite folders": you can organise them into as many submenus as you need.

- Display clearer message when prompting for upgrade from FoldersPopup to Quick Access Popup (prompt displayed only for QAP releases with new features)
- Add the auto-detection of .ahk and .vbs extensions when user add a favorite using drag-and-drop to the Settings window
- Stop launching Directory Opus when refreshing the list of open folders in listers if Directory Opus is not running
- French, Sweeden and German language files update
- New runtime v1.1.23.5 from AHK

A well-designed tool which really can speed up folder navigation

Change date/time stamps and many more attributes of your files