An open-source binary-compatible version of Windows 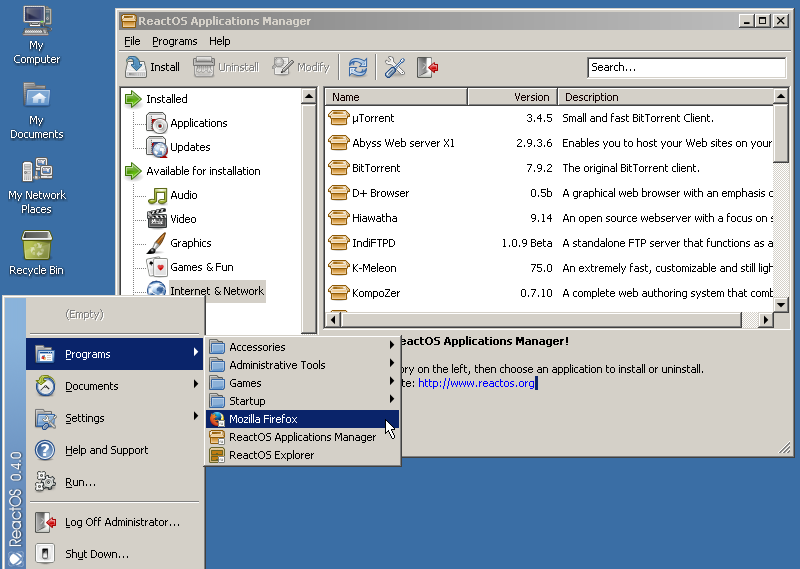 ReactOS is an open-source binary-compatible reimplementation of Windows.

In other words, it's free. You can boot your desktop or laptop from it. It looks like Windows (a 10-year-old version, anyway), so you already know how to use it. And it'll run some Windows and DOS applications, maybe including DOS games that regular 64-bit Windows can no longer touch.

While that sounds great, this isn't a project for the average user. It's an alpha, missing some major features (they've only just added NTFS read support, can't write yet), and what you do get has plenty of bugs.

If you're willing to spend some time exploring ReactOS, and you don't expect too much, then there are some interesting touches here. Double-click the Applications Manager shortcut on your desktop and you're able to browse and install some great tools, all in a couple of clicks: VLC Media Player, Winamp, GIMP, Irfanview, Firefox, Opera, OpenOffice, BurnAware, CCleaner, assorted torrent clients, VNC tools and more.

You can also try installing other Windows and DOS applications. This is more likely to work with older, simpler packages (Win95 text editor = probably yes, huge multimedia suite = probably no), although there are no guarantees.

For the best results, follow the download link, grab the "BootCD" file and install it somewhere (this can be a VirtualBox VM if you don't have a spare PC). There's also a LiveCD which will boot ReactOS, and allow you to browse its menus, but you won't be able to install anything.

ReactOS is a hugely ambitious project - which is partly why there was a 10-year gap between versions 0.3.0 and 0.4.0 - and the developers have achieved a lot. But it's also still very much an alpha, unreliable and packed with bugs.

If you just want a free operating system that's easy to use, you'll be much happier with something like Linux Mint.

But if you're a more experienced user, happy to spend time tweaking or exploring, and you really need to run older Windows binaries, then ReactOS could be interesting. Install it on some ancient laptop, and you just might be able to use your favorite legacy software again.