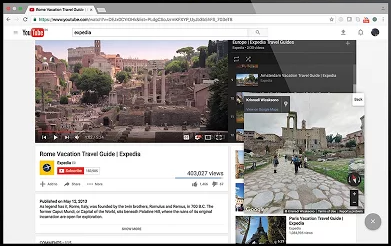 Flico is a clever Chrome extension which can detect landmarks in YouTube videos, then tell you about them, give quick access to Google Street View of the area, a map, and more.

Once installed, Flico adds a button to your page whenever you open a YouTube video. If you see a landmark which you don't recognise, pause playback, click the button, then "Scan Landmarks", and Flico goes to work.

We tried this with an image of Grauman's Chinese Theater on Hollywood Boulevard, and within a few seconds Flico had given us the correct location, and the opening section of its Wikipedia page.

At the bottom of that panel were buttons to open Street View at that location, display a map, or find nearby restaurants.

Bizarrely, there's also an entirely separate function which aims to detect and display the definitions of "new words" displayed in a video frame (subtitles, say). There's no translation involved, it's English language only, and even then the feature only worked occasionally for us. Check it out for two minutes, then give up and go back to the landmarks.

Flico is a clever add-on which really can identify well-known locations in YouTube videos. We're not sure how many people need that power, but it's fun to explore for a few minutes.