Get alerts about "unreliable" news sources 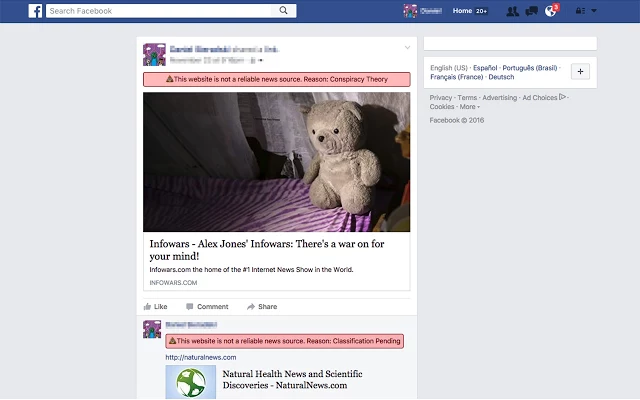 B S Detector is a Chrome, Opera, Safari and Edger extension which aims to warn you about "unreliable" news sources, currently only on Facebook.

It scans links in your timeline and checks for references to sites in the B S Detector blacklist, a potentially lengthy process which can slow you down. If there's a match, an alert tells you that "this website is not a reliable news source" and may display a classification to explain why. These include:

Visit a blacklisted site directly and you'll see a similar alert at the top of the page, but the extension stops there. You don't have to pay attention to its verdict, and can carry on reading any site just as usual.

B.S. Detector could work for some people, in some situations. If you're worried about what your kids might be seeing online, then giving them alerts that a story comes from a hate site (or whatever) isn't necessarily a bad idea. They're not being prevented from reading it, after all-- it's just a warning.

But if you do try the extension, keep in mind that it's only offering a very basic reliability hint. Finding a story on a "rumor" site doesn't necessarily mean it's false, any more than reading something on a regular news site guarantees that it's true, and ultimately you'll need to apply some critical thinking of your own to help decide out which is which.

The latest news, sport and analysis from the Telegraph

Keep up to date with the latest content from Digg

Monitor the latest BBC news headlines from your desktop

Track all of your social networks with a single application