A simple, elegant and smart alternative to Evernote 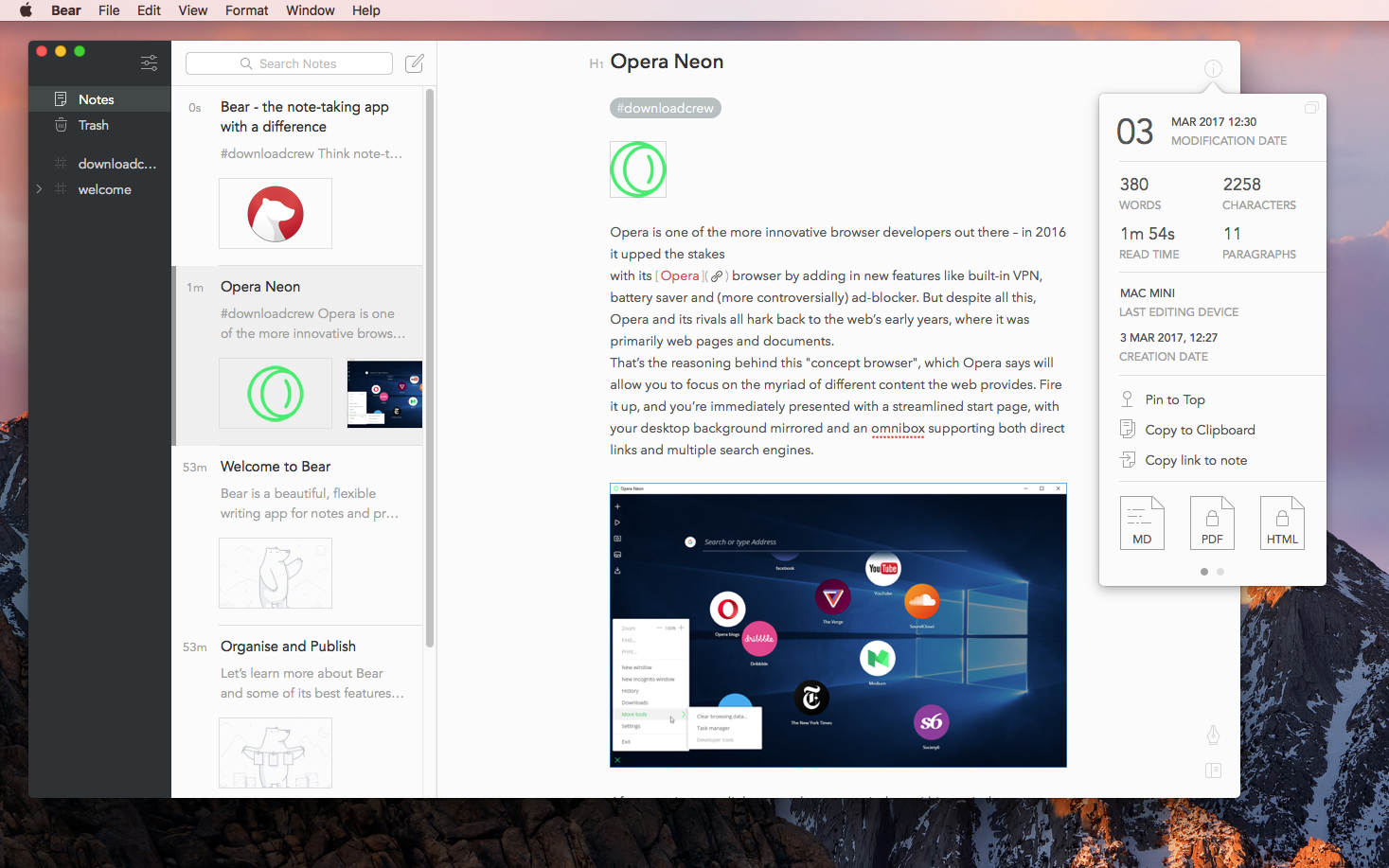 Think note-taking app, and Evernote springs to mind. But Evernote can at times feel over-complicated. At the other end of the scale is Simplenote, but for many people it’s too simplistic: text-based notes and nothing else.

Sitting somewhere in the middle of the two is Bear. It sells itself as a "writing app for crafting notes and prose", with a focus on providing rich text editing, support for inline images and other handy cross-reference tools, from hashtags, markup tools, links (including in-line links to other notes) and locations, as well as the ability to embed to-do notes. All of this is possible despite the fact notes are actually stored in the ultimate portable format: plain text.

The app focuses on simplicity: it takes a three-paned approach, with the Sidebar providing easy access to hashtag filters, while the middle pane houses your notes in order of modification date, with a handy search bar and 'create note' button at the top. The right-hand pane houses the Editor, displaying the currently selected note. It’s all straightforward and won’t take long to master.

Start editing and you’ll see there are some restrictions compared to Evernote – Bear supports keyboard and text-based shortcuts for styling, but there’s no format pane and you’re limited to a choice of just four fonts (set this via the Preferences pane). However, tap the ‘i’ button and you’ll reveal a handy information pane, complete with running word count along with clipboard tools, sharing the note to other apps, and an option for pinning this note to the top of the list.

You’ll also see options for exporting the note in a variety of formats, but this is where you’ll bump up against the free version’s limitations? If you want to export in PDF, HTML or another format, or sync notes in real time between Mac and iOS (using iCloud as an intermediary), you’ll need to upgrade to the Pro version.

This is subscription-based, but competitively priced compared to Evernote (just $1.49 a month, or $14.99 a year). Pro subscribers also gain access to a choice of eight different themes for the Bear user interface. You can road-test these features for free by unlocking a week or month’s free trial depending on which subscription you choose.

There’s plenty to like about Bear – it’s a shame you’ve got to pay a subscription rather than a one-off fee to access its extended features, though. The trick for this app will be to evolve without falling into Evernote’s trap, trying to pack in too many features for the sake of it.

- Changing Bear's theme now changes its app icon, and each theme has its own unique icon. This works for the two free themes and all Pro themes (currently 8, with more coming!)
- Bear has been translated for three new languages: Korean, Russian, and Brazilian Portuguese

An excellent choice for those put off by the complexity of Evernote, but who need more features than the likes of Simplenote.

Collect, store & share your notes and media through your computers