ZoneMinder is a comprehensive video security and monitoring system. 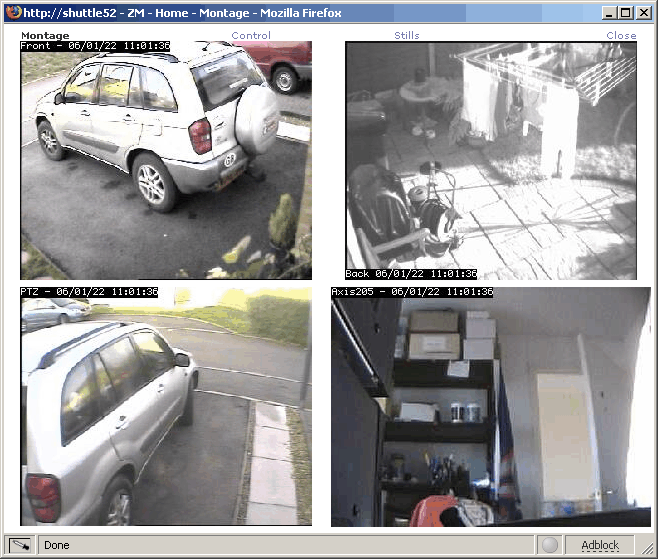 ZoneMinder is a video camera security and surveillance solution for Linux. ZoneMinder is intended for use in single or multi-camera video security applications, including commercial or home CCTV, theft prevention and child, family member or home monitoring and other domestic care scenarios such as nanny cam installations.

ZoneMinder handles several cameras simultaneously and can display several at once or cycle between them. The server runs the program on the computer to which the cameras are connected while all viewing and interaction is done using a web browser, on the same computer, elsewhere on the network, even from another country or just keeping an eye on the kids from your laptop downstairs.

Cameras can be monitored in real time, and set to record everything they see, or they can use motion detection. In this case, ZoneMinder only starts recording when an event, such as movement, occurs. Because ZoneMinder keeps the last few seconds of each cameras output even when not recording, when motion is detected it also saves the few seconds before, and several seconds after motion is no longer detected, to give a full recording of whatever happened.

<0>The name ZoneMinder refers to the way that areas of each camera's output can be prioritised or ignored. If the field of view of a camera in an office includes a window, you don't want an event generated whenever a car passes by outside, so you exclude the windows from the detection system. When a motion event occurred, ZoneMinder will record it but also notify by email, instant messaging or SMS, so that wherever you are you know what is gong on. the web based nature also means that you can view the recording of the event from anywhere, even on your phone if it is a smartphone.

ZoneMinder has many of the features of some expensive security systems, for free.

Transform your Sony digital camera into a high-end webcam

Transform your webcams and microphones into a powerful surveillance tool

Set up your own video monitoring system

Turn your web cam into a valuable security device

Build your own video surveillance system with ContaCam

Monitor and record webcams and IP cameras with ImWatcher

Control your PC with a webcam via Camera Mouse 2015