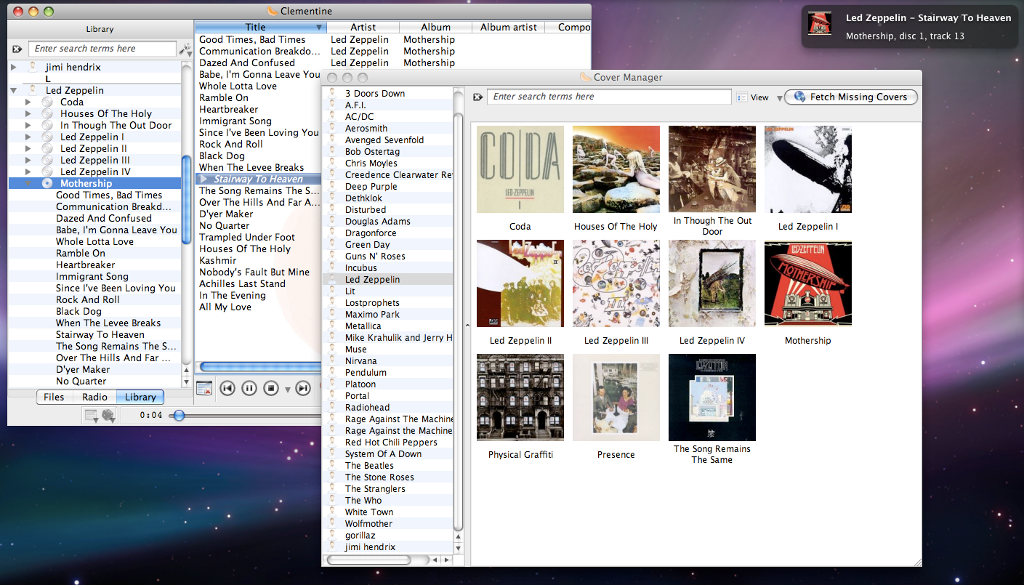 Some people were disappointed when Amarok 2.0 was released, it had changed a lot from the tried and trusted 1.4 and not to everyone's liking. Amarok 1.4 was still around, but uses the older QT libraries, which modern distros do not install. Being open source, it was almost inevitable that someone would take the Amarok 1.4 source code and begin porting it to QT4. What was far less inevitable was that the porting project would reach the stage of a usable release, but that is exactly what Clementine has done.

Porting to QT4 has two advantages, not only does it mean that Clementine can run on modern distros without needing older libraries, but QT4 is also available for Windows and MacOS X, so Clementine is now truly cross-platform.

If you ever used the older Amarok, you will feel immediately at home with Clementine. Some of the more esoteric features have not made it across (yet) but that's not necessarily a bad thing, Amarok was already beginning to get quite bloated (or feature rich, depending on your point of view) by the 1.4 release. The basics are there, playlist management, ID tag editing and Last.fm integration. The latter not only allows you to listen to music from Last.fm, you need an account there, but it can also download cover art from their site. Clementine can also play streamed audio fro many Internet radio stations, although it doesn't have the podcast support of Amarok 2.

If you want a basic but functional music player that fits in with a KDE desktop, you won't go far wrong with Clementine, even at this early stage of its development.

f you yearn for the good old days when Amarok just played music, this is the player for you.

Great player
24 January 2012 18:04, Haris K.
The beat audio player in my opinion.
Features in Clementine Media player
15 April 2011 10:58, Thomas John
Its god to know Clementine Music Player is out. What I would like to add here is some new features in Clementine 0.7
A brand new Edit tag dialog with auto-completion and ability to automatically identify music and fetch missing meta-tags from MusicBrainz on MP3 and OGG files. You can modify multiple songs simultaneously, download missing album cover art from Last.fm and organize your music.
Support for CUE sheets: They are detected automatically when scanning your library and each track shows up separately.
To know more visit:
<a href="http://ubuntumanual.org/posts/283/clementine-media-player-new-and-improved">Here</a>
or
<u>ubuntumanual.org/posts/283/clementine-media-player-new-and-improved</u>
Related Downloads Other Downloads From This Category

Quickly tag your MP3 files that are lacking the correct information

A fast and simple CD ripper to help convert your music