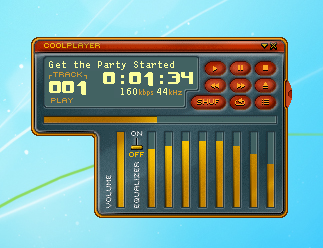 CoolPlayer is one of the most compact audio players we've seen - a 263KB download - yet somehow still manages to squeeze a lot of features into its tiny frame.

The program launches with an attractive skin, for instance (and more are available). In a couple of clicks it can open your preferred files (MP1/ MP2/ MP3, OGG, WAV or M3U/ PLS playlists are supported) or folders. Provide the necessary URL and it can even open streaming MP3 or OGG files, as well as online M3U playlists.

An 8-band equalizer is available for immediate tweaking. Playback buttons help you pause or resume tracks, step next or back, repeat a track or shuffle the playing order. And if you prefer keyboard shortcuts, there are plenty of those, too.

A simple editor, accessible with a click, makes it easy to create, edit, save and recall M3U/ PLS playlists.

Supposedly there's also an ID3 multitagger, although if this is true we couldn't see how it was supposed to work.

And CoolPlayer minimizes directly to the system tray, keeping its system impact at an absolute minimum. Although with the program requiring only around 13MB RAM on our test PC, even during playback, it's never exactly what we'd call heavyweight. And you can have it minimize to the taskbar with a settings tweak, if you'd prefer.

If there's a problem here it's that CoolPlayer appears to be an abandoned project, with no updates for more than four years. It still worked just fine for us, though, so if you're looking for a very small portable music player then it may be worth a try.

CoolPlayer looks great, and plays back MP3 and OGG audio files while requiring the absolute minimum of system resources

Get more from your music with this powerful, highly configurable audio player

Manage your burgeoning music collection with this tagging and organisational tool