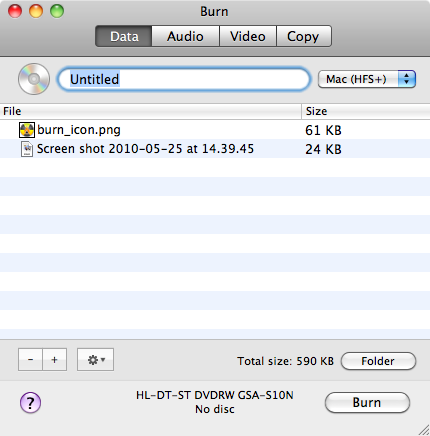 While OS X includes built in support for disc burning, if you want to achieve something more advanced than simply burning a few files onto recordable CD or DVD, you're going to need a dedicated disc burning tool. Burn is such a program, and while it is incredibly simple to use thanks to its streamlined interface, it is capable of creating a range of advanced projects.

As you would expect, Burn can be used to create backups of any time of file, but it can also be used to create audio and video discs. Burning audio CDs and DVDs is a simple matter of dragging music files onto the program interface and an MP3 disc is just a few clicks away.

Burn is also capable of creating video discs, from simple DivX discs to discs with interactive menus. There are a number of built in menu themes to choose from, but you also have the option of creating your own from scratch.

Disc duplication is also available and there is no need to worry about the format your audio and video files are in as Burn will automatically perform any necessary conversion.

Burn includes just enough features to make it more useful than OS X's built in disc burning, but manages to remain simple and intuitive to use.

A free and easy to use disc burning suite

A complete digital media toolkit for your Mac