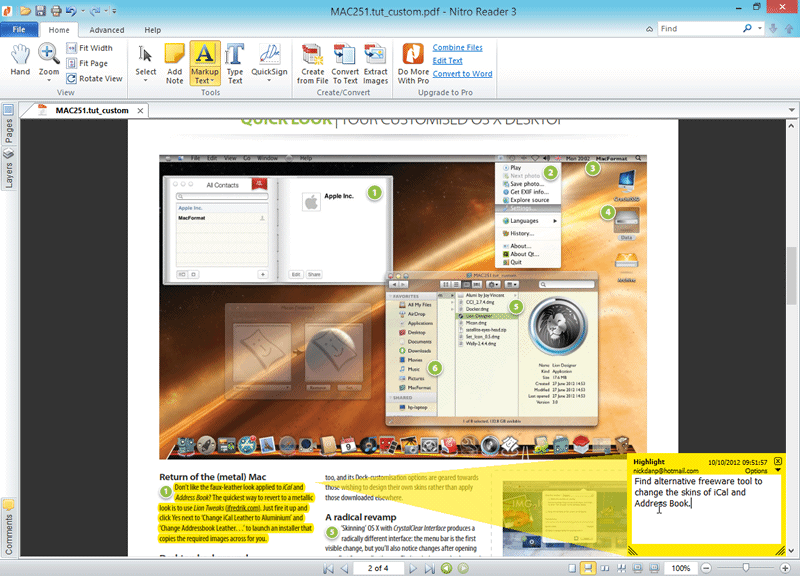 The key reason for the success of the PDF format is that it allows you to view a document exactly the way it was created without having to open it in another application first. It doesn’t matter if you’ve written a Word document, put together a spreadsheet or laid out a brochure or invitation, exporting it to PDF means the outside world can easily view and print it with the help of free software.

Most people use Adobe Reader to view PDF files, and are perfectly happy to do so, despite the fact little has changed since it first appeared on the scene. For a long time, Adobe had the market all to itself, but in recent years a crop of free alternatives have sprung up, all keen to grab a slice of its market. Now Nitro Reader is here and it's giving Adobe Reader some serious competition.

Nitro has two options for creating PDFs: either convert a file directly from one of over 300 supported formats (including HTML, Microsoft Office and plain text), or use the application’s own virtual print driver. Version 2.0 debuted a completely redesigned creation engine that promises to be up to four times faster while producing final PDFs that 50 per cent smaller than with previous versions.

Nitro Reader is bursting with additional features, some of which you won’t find elsewhere. There’s QuickSign, for converting your handwritten signature into a stamp for placing on PDFs. Nitro will also allow you to view web-hosted PDFs from inside your browser (assuming it’s IE, Firefox or Chrome). There’s collaboration and review tools in the form of virtual sticky notes, a typing tool for adding text to the page, and options for filling in forms electronically.

Despite all these features, the program is simple to use thanks in part to its ribbon interface, ensuring all the main features are accessible with a simple click. It’s fast too, but despite this it does tend to consume a fair amount of resources, meaning you may have performance issues running it on older, less powerful machines.

This is the 32-bit build of Nitro Reader. A dedicated 64-bit build is also available.