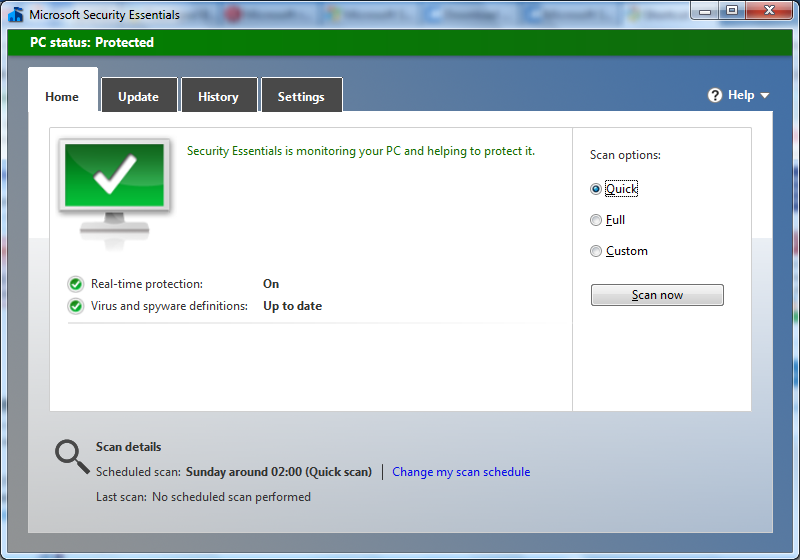 The core functionality works much like any other antivirus package. Strong real-time protection looks out for and removes threats before they can cause any harm. But you can also run scans on demand, or automatically (via a scheduler), to detect any malware which may have penetrated your defences.

Microsoft Security Essentials does have a few useful configuration options, too. So you can, say, limit the program's CPU usage during a scan to reduce its impact on your PC. But for the most part, once you've spent a minute or two browsing the Settings dialog you'll probably be able to leave MSE alone, perhaps even forget it's there: this isn't the type of program to get in your way.

What's new this time? There are no major changes, this release is more about gentle evolution of the product. So the interface has been simplified; the program is now better at automatically quarantining threats; performance and detection rates have been improved, and Microsoft's Active Protection Service (the new name for SpyNet) can send reports on detected threats back to Microsoft to help improve the program. (Although if you're concerned about privacy, don't worry, you can tell the program not to send any information to Microsoft within the Settings dialog.)

What doesn't appear to have changed, though, is that the program remains lightweight and relatively compatible with other antivirus tools. MSE recommends during installation that you shouldn't run it alongside other antivirus packages, but we were able to install and use it next to Norton Internet Security 2012 without experiencing any problems at all.

Note that Microsoft Security Essentials is now free for small businesses to deploy and use. This is for Windows Vista/7 64-bit computers.

A simple, effective and resource-friendly way to keep your computer free from malware infections