Keep your desktop in order with this icon organisation tool 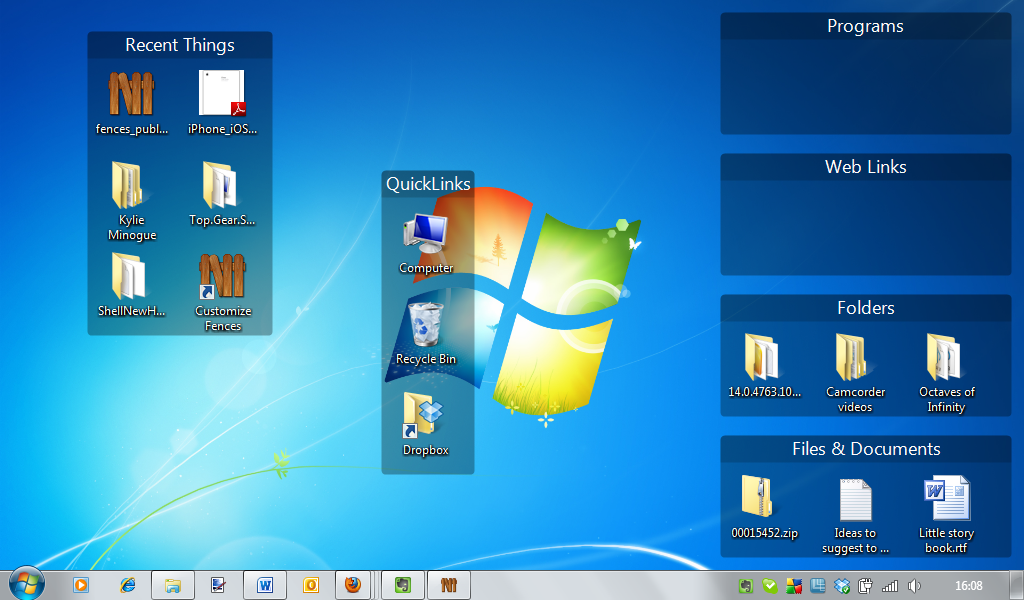 However organised you may be, it does not take long for a once tidy desktop to become cluttered with all manner of folders, shortcuts and files. This can have an impact on performance, but it also means that it can take a long time to find what you are looking for.

Fences is a program that may just be able to help you to keep on top of things. The utility can be used to create desktop-only folders called fences that can be used to house icons. Fences can be resized and positioned anywhere on screen and can include scrollbars to provide access to additional icons.

If you want to access your desktop, all that is needed is a quick double click of an empty area and all of your fences will fade away - double click again and they will re-appear. You can opt to allow the program to automatically create fences for you, or you can create those you feel are necessary.

Various desktop snapshots can be saved and loaded in an instant. This means that it is possible to save different desktop and Fences configurations for different tasks you perform on your computer. Fences is a real productivity enhancer which helps to keep your desktop free from unnecessary clutter so you can see what you are doing.

Note that Fences is now trialware (previous versions were free).

- Fences 4.07.02 offers these changes/improvements (see changelog for more):
- Fixed an issue where Winkey + D would render Fences folder portal blank
- Updated some of the core translations for missing strings
- Fixed a crash that could happen on Windows Server 2016
- Fixed an issue in the Fences UI where it could render dark in light mode under certain conditions
- Added Korean language
- Added Chinese-Traditional language
- Added Portuguese-Brazil language
- Fixed issue where some text/checkbox controls would get squished to 1px-wide when returning from minimized state
- Added ability to navigate within folder portals even if "Open folders in separate Explorer process" setting is enabled
- Improved link contrast in dark mode when gray highlight color is selected
- Fixed minor graphical glitch in Win10 Dark Mode
- Fixed issue where hotkeys could get stuck (Fences stuck on top until next hotkey press)
- Updated German translations
- Fixed Folder Portal crash when details-view is used alongside multiple levels of sorting.
- Fixed issue where double-clicking fence docked to the bottom of the screen would result in errant behavior.
- Fixed issue where View/Sort menu items in the new Windows 11 desktop menu would not show as properly checked/unchecked in certain circumstances / on recent builds of Windows.
- Fixed issue where multiple icons pasted to desktop at once could overlap one another.
- Added detection of low inter-icon spacing settings, to reduce text overlap within fences in these situations.
- Fixed truncated "days left in your free trial" text with acrylic text drawing (Win11).
- Fixed folder icon centering with large fonts.
- Adjusted rename edit box text positioning.
- Updated rules so that link-target rules always apply first.
- Improved corner-rounding radius on hotkey "show fences" mode to better match desktop.
- Improved hotkey "show fences" performance and reliability.
- Improved reliability of Folder Portals to stay pinned to desktop i.e. to not appear over top of other apps.
- Removed option to keep fences on top "even after switching windows" during hotkey "show fences" usage, as featured caused compatibility issues with other programs.
- Resolved issue where "Lock Fences" menu item did not appear when fence titles were hidden.

A great way to ensure that the icons you need access to are always available, Fences makes light work of tidying up even the messiest of desktops.

Organization.
21 May 2016 14:19, Nelson André Hofer de Carvalho
Fences is an essential program for those who wish to have an organized desktop.
It is very easy to setup and use.
Version 3 brought wonderful news to allow better use of space on the desktop.
Related Downloads Other Downloads From This Category

Tag, rate and browse your files for easy access

Quickly get your PC organised with this handy file management tool

Automatically organise your files with this rule based utility