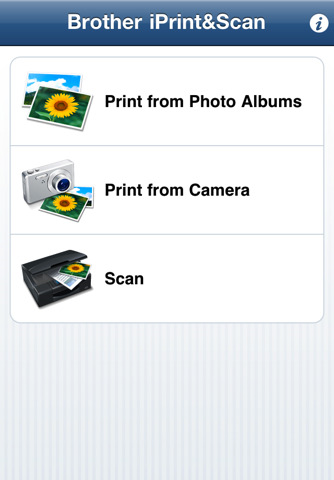 If you have a recent Brother all-in-one printer, iPrint&Scan is an incredibly useful app that enables you to use it with your iPhone or iPad. By connecting to your printer over a wireless connection, it is possible to print photos from your Apple devices without the need to transfer files to your computer first.

This in itself is nothing new, as other printer manufacturers have produced similar apps. However, as the name would suggest, iPrint&Scan also offers support for scanning. This means that photos and other documents can be scanned using your Brother device and sent directly to your iPhone or iPad.

Scanned images can be saved directly to your photo album and the entire process is made as simple as possible thanks to a clear menu system. Getting the link established between your iPhone/iPad and Brother printer is a nicely automated process, and the app can be used even if your printer is not connected to a computer.

It is a shame that the app can only be used in conjunction with Brother printers, but if you own such a device, this is an incredibly useful tool.

A quick and easy way to create hard copies of files on your Apple device, or transfer scans to it.

A compatible Brother printer/scanner is required

Take advantage of your Sky subscription on your iPhone, iPod or iPad

Access your desktop computer from your iPhone or iPad

Take control of your wireless network from your iPhone or iPad

Use your iPhone or iPad as a portable television