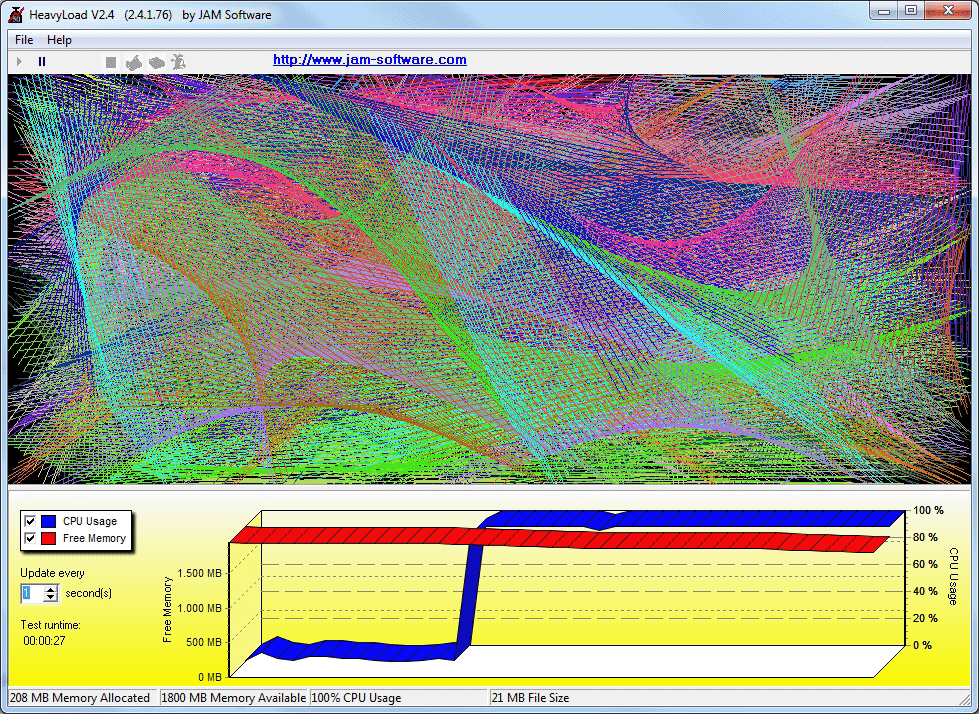 HeavyLoad is a simple but effective tool for stress-testing your PC.

The program is very easy to use. Launch it, click the Start button, and HeavyLoad will immediately begin allocating memory, reading and writing to your hard drive, exercising your graphics card, and more, while its graphical display shows you exactly what's going on.

Why bother? This kind of utility has several applications.

If you believe your PC might be crashing when it overheats, for instance, running HeavyLoad will help test this.

If you've just overclocked your system then running HeavyLoad will check its stability.

And we regularly use HeavyLoad to test programs which claim they can optimise the processes running on your PC, for example to prevent "runaway processes" from grabbing all your CPU time.

Be careful, though. If your system really is unstable, then this kind of stress-test can cause it to lock up or crash. Be sure to save any important work in other apps before you give HeavyLoad a try.

•Please note: Windows XP and Server 2003 are no longer supported.

•Bugfix: The test method "Stress GPU" was unable to load textures to produce GPU utilization with current OpenGL drivers. The component used to produce the textures has been updated.

•Bugfix: The base load of HeavyLoad (when running without active tests) could be reduced to less than 5%. The load was caused by the calculation of real free memory in the StatusBar.

•A few minor fixes have been incorporated.

Tune your CPU and RAM for the best possible performance

Monitor the temperature and status of your hardware

Take control of every aspect of your display and graphics card

An easy way to find and repair Registry errors

Stress-test your PC with HeavyLoad 3.4