Translate text on your iPhone, and have the translations spoken aloud to you 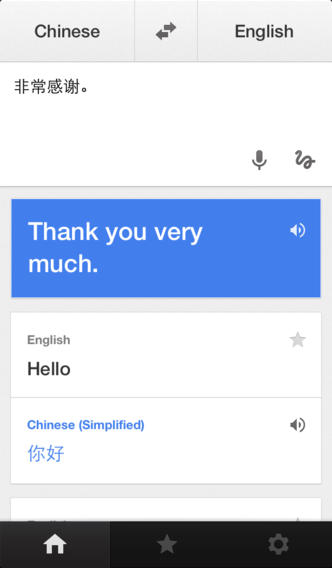 Google Translate has been available as an online tool for some time, but an iOS app has been a long time coming. With support for a wide range of languages, speech to text and text to speech, things bode well for the app, but translation tools are notoriously easy to trip up, particularly when voice recognition comes into play.

The number of supported languages extends to an impressive 90, ranging from the more common such as English and French, to Swahili and Yiddish.

While the app can translate between all of these languages, not all of the translation modes are available for each one. For example, translation using the speech to text feature is only supported in 26 languages and the option to have translations read aloud is supported in 40. When it comes to translating typed text, success rates improve dramatically, but this is dependent your ability to spell correctly.

For languages that make use of non-Latin characters, phonetic translations are spelled out. When translations are spoken aloud, in many instances the text is spoken too quickly to understand. As there is no option to chance properties of the voice that is used, this means that repeat listenings are often required.

When text has been translated, it can be starred to allow for easy access in the future, and you can also enlarge the text into full screen mode to make it easier to show the translation to others - great when you are abroad and don’t fancy the idea of chancing your accent. While the app requires an internet connection to make translations, any text that has been starred is stored offline so it can be accessed at any time.

The speech recognition feature of Google Translate is simultaneously the apps greatest selling point and biggest weakness. Unexpected results are thrown up on an all too frequent basis, and you will have to be prepared to repeat words and phrases as speech is often not recognised. If you stick to typing, this is a great app to take on your travels and the speech component is an interesting curiosity.

An adventurous and slightly flawed translation tool. Text translation fares far better than the more exciting speech recognition, and the range of language that are available is impressive.

Use these three iOS apps to find the cheapest flights

Find and book a unique stay with these three travel apps

Stuck for where to visit next? The Hopper app will help!

Google Maps will now help you find a parking space