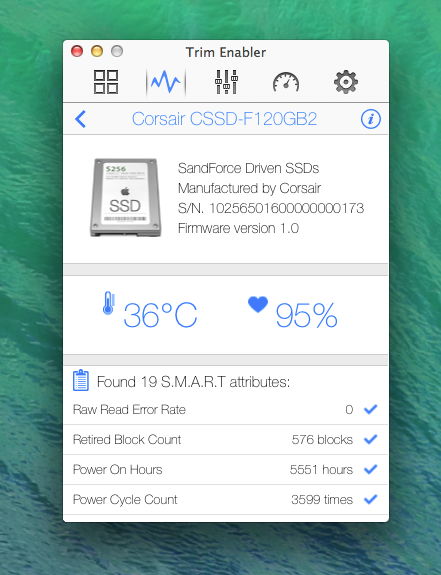 There’s no doubting that Solid State Storage (SSD) is the future – SSD hard drives are up to five times as fast as the traditional hard disk in most people’s computers, and with prices finally falling to a level where it’s a practical purpose, more and more people will consider

While SSDs are no longer affected by disk fragmentation thanks to the fact all parts of the drive are accessible virtually instantaneously, their write performance can still degrade over time. This is down to the way data is stored on the drive, which is affected by the way the OS traditionally deletes data from the drive. This problem has been mitigated by a special command called TRIM that helps prevent this degradation from occurring by physically wiping the space marked as deleted by the OS before it's written to again, which keeps performance at an optimum level.

Unfortunately TRIM is only supported in newer builds of Windows, while the latest revision of Apple Mac OS X Snow Leopard (10.6.7 or higher) supports TRIM, but only on Apple-manufactured drives. However, the Mac community has discovered a way to get Snow Leopard/Lion to support TRIM on all SSDs. It’s quite a complicated procedure to follow, which is where TRIM Support Enabler comes in: this tiny utility will do all the hard work of enabling TRIM support on most SSDs for you via a single click and reboot.

It’s a doddle to use, and should work on any SSD that supports TRIM – we tested it on our Mac Mini running a Kingston 64GB SSD and it worked first time. Once rebooted, verify it's working via the System Profiler tool - select your SSD, and you should see if it's enabled or not.

Note that TRIM support is disabled by updating Mac OS X, so you’ll need to reapply the patch again. Make sure you back up your SSD before applying the patch, just in case – use Carbon Copy Cloner for this task.

This is TRIM Support Enabler 3.2.2. Changes include:

An essential tool for any Snow Leopard user running a SSD - but back up first, just in case.

Examine, test and speed up your Intel SSD with this useful toolkit