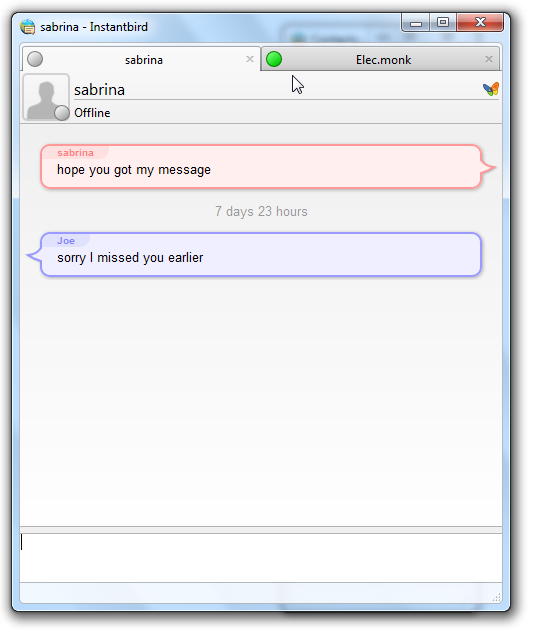 Once upon a time, instant messaging ruled the social networking roost. No longer, as the growth of Facebook and Twitter change the way we interact with each other in real time. Even during its heyday, you could find yourself having to sign up for multiple instant messaging accounts like Windows Live Messenger and Yahoo! Messenger in order to keep in touch with everyone.

To get over this problem, tools like Trillian and Pidgin allow you to access most – if not all – of your accounts through a single interface. Over time, both have developed to include social networking sites too, which is why Instant Bird feels like it’s a little late to the party.

As a one stop shop designed to give you access to everyone you talk to online, Instantbird doesn’t quite hit the mark. There may be times when you’ve struck up a conversation on Twitter or Facebook and want to move to real-time messaging, but the program makes it no more easy than firing up your instant messenger of choice alongside the social media web page or desktop client.

Instantbird doesn’t support audio or video chatting either, and there’s no real feeling of integration beyond using the same interface, which is an evolution of Pidgin’s. That said, it can be convenient to keep everything in one place and the program shows a lot of potential, especially given its relatively small footprint on Windows.

Instantbird supports add-ons, extensions and themes in much the same model as Firefox, betraying its links to Mozilla. To find a new one, choose Tools > Add-ons and enter a search term. The selection is limited but the open source nature of the program should provide it with much potential to grow in future.

Note that this is the portable version of Instantbird.

Instantbird has the potential to be a handy one-stop shop for instant messaging and social networking, but it’s not as slick or fully featured as some of its rivals.