Accurately measure the time it takes an application to launch 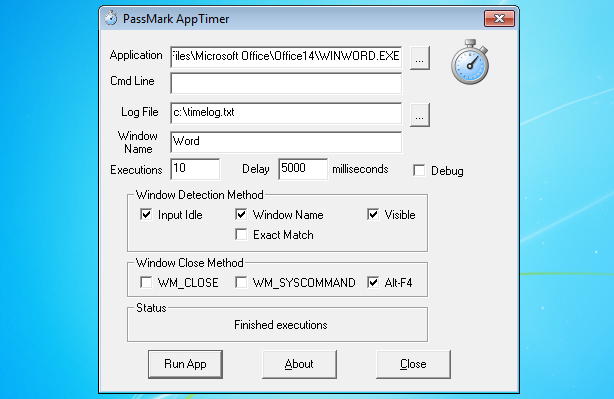 PassMark AppTimer is a compact benchmarking tool which lets you measure how long it takes for an application to launch. This isn't something you'd want to know every day, but it could come in useful if, say, you've run a system speedup utility and want to know whether Microsoft Word is now loading any more quickly.

Despite only having one main screen, setting up AppTimer can still be a little complicated. You have to locate the application you want to run, for instance, and specify a log file where the launch times will be saved.

The program also needs to know the caption of the program's window, or at least a word in the title bar ("Word" for Microsoft Word, say).

The Windows Detection Method box tells AppTimer the point at which the timer can stop. Start by checking "Input Idle", "Window Name" and "Visible"; this asks the program to wait from launch time, until a visible window has appeared, with the name text you've specified, and it's waiting for user input.

The Window Close Method specifies how you'd like AppTimer to close the application so it can be relaunched; options are to send it WM_CLOSE or WM_SYSCOMMAND messages, or simulate an Alt+F4 keypress (or any combination of the three).

And finally, you're able to tell AppTimer to run the program a specific number of times, pausing for a given number of milliseconds between each launch.

Put it all together and you could, say, have the program measure the launch time of Microsoft Word, close the program, then repeat the process for as many times as you like. Launch times after the first should be shorter, as files are loaded from the Windows cache rather than your hard drive, but this could still be a useful guide to application performance, and help you see if any speedup tweaks you might apply are having any effect.

AppTimer is more complicated than it needs to be, and would benefit from a few usability improvements, such as an option to display the log file. It does provide a flexible and accurate way to measure application launch times, though, and that's something you can't easily do in any other way.

Test the speed and performance of your iPhone or iPad

Check whether your installed software needs updates, plus keep one eye on the latest software news

Record which apps are used on your PC, and when

Easily create websites based on WordPress, Drupal, Joomla! and more