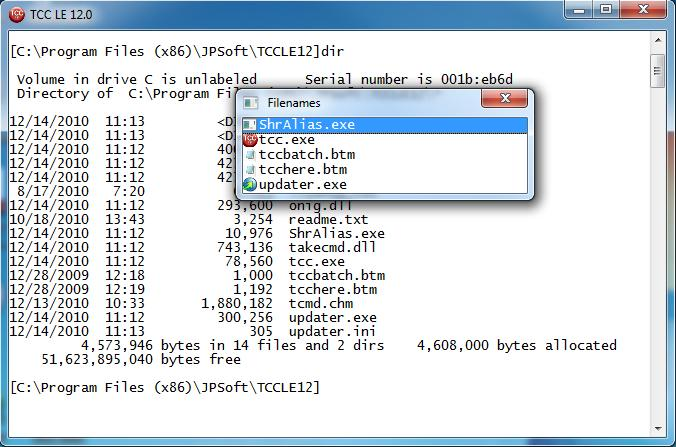 TCC/LE is an extension of the Windows command shell, cmd.exe, which offers many additional features, while also being compatible with your existing batch files and command line tools.

Open a TCC/LE window and at first it appears you're at the regular command line. The copyright message is different, the current folder is displayed in square brackets, but otherwise it looks the same. And it works in the same way, too, so you can immediately begin entering all the usual cmd.exe commands and they'll work the way they always did.

Start exploring these individual commands, though, and you'll soon spot differences. Try entering "copy /?", for instance, and you'll see many new switches, including /FTP for carrying out FTP ASCII copies. The DEL command gains several new switches, including one to send files to the Recycle Bin; the Copy command adds a Synchronise option, amongst others; and it's the same for every other command, with hundreds of additions in total.

A built-in scripting language means your batch files can be extended with loops, conditional testing, subroutines and more.

The ability to select files by date, time, size, extended wildcards, regular expressions and more makes it much easier to apply commands only where they're needed.

The TCC/LE command line supports command line and directory histories, and file and folder name completion, making it a much more comfortable place to work.

And if this isn't quite enough then TCC/LE can be extended with plug-ins to provide whatever new commands you need.

Please note, authors JP Software also produce even more powerful versions of the product with many extra abilities. Take Command, for instance, can run multiple sessions in tabbed windows (and you can have up to 25 startup tabs); has an integrated Explorer window for easier file management; includes a built-in file editor; has active scripting integration (Ruby, Perl, Python., VBScript); has new commands to send keystrokes to windows, monitor software and hardware evens, send email and network messages, and more. See the JP Software site for the details.

An interesting cmd.exe replacement which can help to make your command line life much easier.

Get more - much more - from the command prompt

An easier way to work at the command line

A tabbed command window for Windows 10

Get a tabbed command line window with this cmd extension