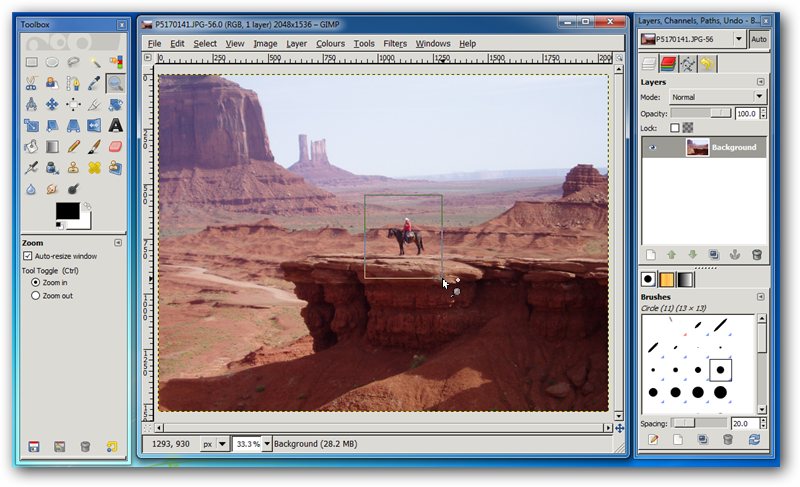 One of the most popular and powerful free image editing apps is GIMP. Unfortunately, its user interface doesn’t follow the usual pattern of other applications, consisting of a number of floating panels rather than a single, unified program window. It’s very much an interface you’ll either love or hate.

The reasoning behind GIMPshop is that you like the power of the GIMP, but you want it wrapped up in a more familiar user interface. It basically takes advantage of GIMP’s open-source technology to produce a version of GIMP that will appeal more to Photoshop users who want to try the app without having to learn a whole new interface.

GIMPshop achieves these by modifying the program’s menu structure to more closely match Photoshop. It also tweaks the terminology used to match what you’ll find in Adobe’s flagship application and finally uses a plug-in called “Deweirdifier” to combine GIMP’s many floating windows in a manner that more closely resembles what you’ll find in other Windows graphics applications.

Consequently you end up with an interface that is more intuitive to use from the off, while retaining all the raw power, features and extendibility of The GIMP itself – while there’s naturally no support for Photoshop plug-ins, GIMPshop works perfectly with GIMP’s own extensive plugin, filter and brush collections.

Note: the Windows version of the program is installed using the InstallIQ wrapper. This tool will offer to install additional programs in addition to GIMPshop – up to five different apps in fact. After clicking Accept at the first screen to install GIMPshop, keep clicking Decline to avoid installing other, potentially unwanted, applications.

If you’ve previously been put off by the GIMP’s unique user interface, GIMPshop is well worth checking out – if you can get past the frankly awful install wrapper.

Also agree!
06 July 2012 12:08, Dan Van Nattan
I think it's terrible... my one experience with InstallQ made me want to slap the person who ever thought it was a good idea to include it with their software. I would gladly pay money just to avoid being plagued by that horrid thing.
Agree with M C Straver
26 January 2012 01:41, Graham Knight
"InstallIQ" does not enjoy the best of reputations mainly I understand because of trying to piggyback other (unwanted) software with the software wanted. My internet security suite (and I believe there are others) who have listed InstallIQ as a 'potentially unwanted application'. I was looking forward to trying GIMPshop - but I can live without it!!
Piggybacking other software...
21 January 2012 11:12, M.C. Straver
I understand the desire to get some return on time put into bundling and editing this package, but piggybacking other software you don't want, and then so many, is, IMHO extremely bad form. The developers should consider asking for donations instead. Users who enjoy and appreciate the effort -will- donate. Wrapping it like this has immediately turned me off from even seriously giving this a try.
Related Downloads Other Downloads From This Category