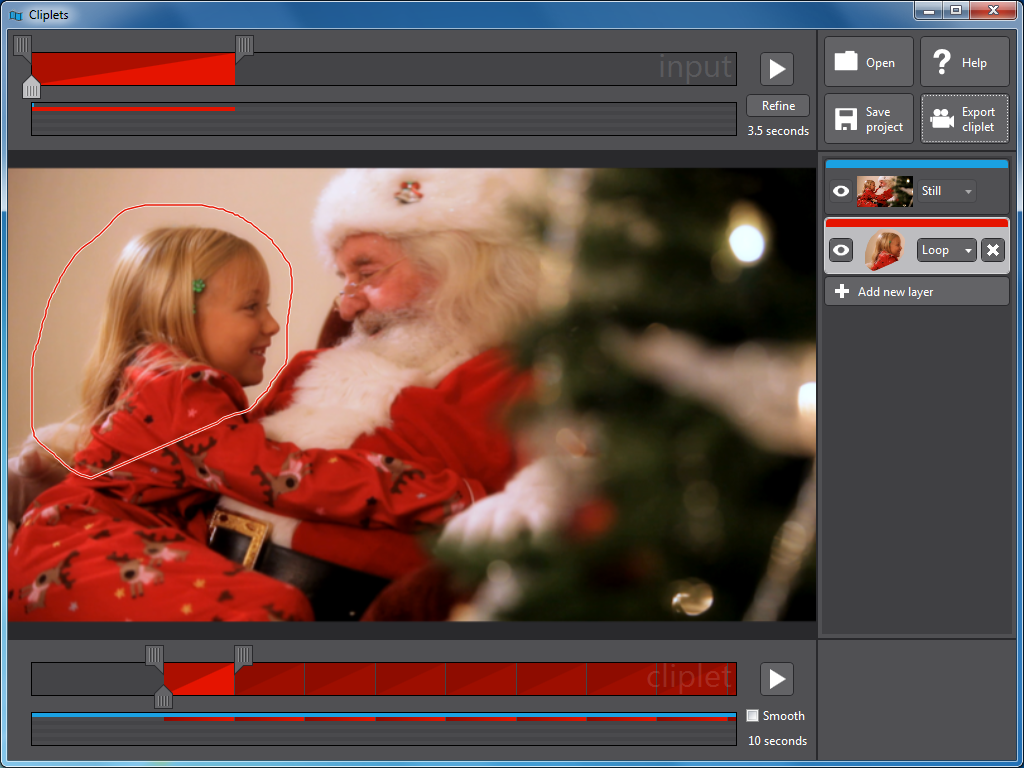 Microsoft's Research Cliplets is an interesting tool which enables you to extract one precious moment from a video, and focus specifically on that, producing something that's not quite a still, not really a video, but something in between.

Imagine a video of your daughter's fifth birthday, for instance: shaky camera work, lots of movement, it's all a little messy. Pass it through Cliplets, though, and you may be able to create something where the background is entirely still, the guests all motionless, and all you have is your daughter blowing out a candle, then smiling at the camera.

Or there's that holiday movie you took, in Rome. Again, maybe there's a lot of movement as you focus on many different things, but Cliplets can help you zoom in. So you might have a view of a fountain in the square, say: people passing by are frozen, motionless, but the water still cascades down just as it always did.

How does it work? You must first import your video, and choose a ten second (or less) section containing the moment you'd like to highlight.

Next, you're able to choose the background frame which will become the still part of the cliplet.

A quick freehand drawing around the area you'd like to remain moving - your daughter in the party, the fountain in Rome - is enough to create a mask.

Then you get to decide how that movement will be treated - whether it loops, where it appears in the overall clip, and so on.

The program then renders and plays the cliplet, and if it all looks good then you can export the results to MP4 or WMV videos.

Problems? This won't work with all videos. The mask needs to contain your movement action and nothing else, for instance. In our birthday party example, for instance, if someone or some object moves into the mask at some point then it'll also be partly rendered, ruining the effect.

And also the program is, well, less than intuitive. So you'll need to watch its video tutorials before you can get started, on even the simplest project.

It is capable of quality results, though, as the examples on the project page show, and with the right source material you could produce something very special.

It's horribly awkward to use and distinctly lacking in Help, but Cliplets is also a fantastic tool for extracting the key moments from a video and turning them into something more focused and eye-catching.

Microsoft Research Cliplets 1.1.1 (64-bit)
16 June 2012 01:16, Carroll Donald
With a little bit of trial and error this is not a bad little program. If you are needing to create an animated GIF with-out much knowledge this is the program you'd be looking for.

For the price (free) it's hard to complain about it.

Two Thumbs Up!
Related Downloads Other Downloads From This Category

19 top applications and downloads from the past 7 days