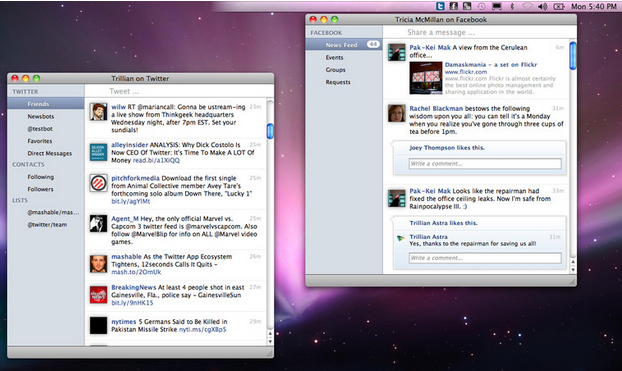 If you’re online there is a very high chance that you use some form of messaging tool to keep in touch with friends, family and colleagues. It used to be the case that if you wanted to talk to someone on Google Talk, or AIM, you would both have to be using a Google Talk or AIM client. With Trillian installed, you have access to not only a range of chat networks such as Jaber, ICQ and Windows Live Messenger, but also social networks such as Facebook and Twitter.

Trillian is an app that is available for a range of platforms, including Windows, Mac and iOS. As the app can be easily used on more than one device, it makes sense that the software should automatically synchronize your chat history between them. But Trillian is not just about chatting – it can also be used to update your status on Fcaebook, post tweets on Twitter and make use of Foursquare.

Still to be added to the app is support for group chatting, as well as support for Skype – once these features have been added, there is not much that needs to be done to make Trillian an indispensible chat tool. Other features you would expect from a chat client such file sharing are also be to found here, and despite the impressive range of features, Trillian boasts a small footprint and speedy performance.

The Mac version of Trillian is good looking, but it does feel somewhat more disjointed that the Windows version. Everything works exactly as it should, but the way the interface is set out is not perfect. The app also suffers due to the fact that there is still currently no support for Skype – this is something that has been available in the Windows version of the software for a little while, but it is promised in a future release.

One of the most feature-complete multi-platform chat client available, Mac users are highly recommended to check this out.

Access all of your instant messaging, social networking and email accounts from a single program.