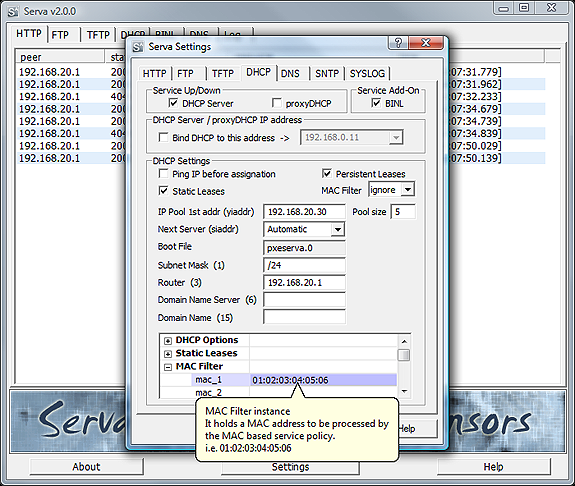 The program is fairly easy to set up. To create the simplest FTP server, for instance, you need to choose an appropriate IP address from a list, check the "Anonymous" box, and point Serva to the hard drive folder you'd like to be able to browse. That's essentially it: restart the program and it's ready to go with your new settings.

There is a little more control available, if you need it. You're able to create up to three FTP server user accounts with passwords, for instance. On the HTTP server tab, it's possible to set your preferred HTTP tab and default page, as well as deciding whether you'll allow file browsing. And the DHCP server tab offers support for MAC filtering.

For the most part, though, you're not going to be amazed with Serva's configurability, extensive security features or anything else, because the program is more about ease of use and simplicity rather than the length of its feature list.

Please note, while the program does offer a free, "non-supporter" version, this will display a nag screen every time it launches. To avoid this you may purchase a Supporter build for $29.99.

Serva is a straightforward and simple tool which allows you to set up an ad-hoc temporary web server in seconds, with none of the usual hassles.

Run Ping, Traceroute, Whois and more with this portable collection of network tools

SyncBack v9 released with an improved UI, new sFTP engine and much more