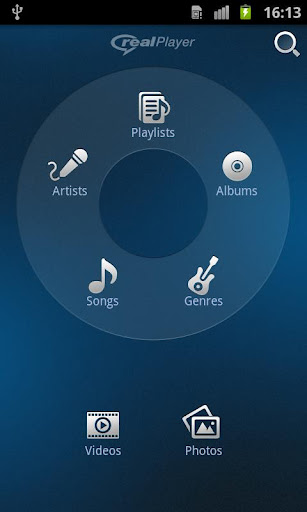 If you’re looking for a media player to take care of your videos, music and photos, there are plenty of Android apps for you to choose from. RealPlayer is an application that is more readily associated with PC, but after something of an extended beta period, a mobile app has been released that can be used to listen to music, watch video files and view photo slideshows.

The app can be used on both phones and tablets, and while the interface is decent enough on both types of Android device, it is a far better experience on a larger screen. Browsing through your media collection is very simple, and support for playlists means that music management is easier than ever. When you are listening to music or watching videos you can share your listening and viewing by posting track titles to social networks or using lastFM scrobbling.

There are lots of nice touches such as the ability to control playback even when your device is locked and a handy home screen widget as another control option. When you’re trying to find a particular file to play, you can type to perform a text based search, but there is also the option of using voice controls. Other notable features include the ability to set tracks as your ringtone, automatic bookmarking of videos and more.

You may have fallen out of love with the desktop version of RealPlayer, but you should try not to let this cloud your judgement of the mobile app. The free version of the app is pretty impressive, but if you are willing to part with $4.99 on an in-app purchase, you can upgrade to the Premium version of the software this enables you to take advantage of crossfading, a graphics equalizer, ads support for RealVideo and RealAudio files and remove advertisements.

An impressive first release on the Android platform, the prospects for RealPlayer look good.

Access your backed up data on your mobile device

Stream music, movies and photos to your iPhone, iPad, Xbox or PS3